Anarchopedia:Article in the news archive

It was also a good year for peace, apparently
The ONLY year, after 1945, in which the US did NOT instigate military conflicts, coups, assassinations, war crimes, and/or create secret organizations, operations, or military doctrines leading to them, according to the admittedly unexhaustive list at List of military interventions by the US :
1977

Thursday, 22nd March, 2012. 'Micronations' in, 'Pretenders' out Preamble remains:
Pretenders and micronations are a fascinating subject, because in their impotence, they lay bare the lack of any real power that states have. All is in the mind of the governors or the governed, or guns, or butter

Pretenders to the Ottoman Dynasty[edit]

The Ottoman Dynasty (or the Imperial House of Osman) (Turkish: OsmanlÄ± HÃ¢nedanÄ± ) ruled the Ottoman Empire from 1299 to 1922.[1] AbdÃ¼lmecid I is widely considered to be the last emperor of the Ottoman Empire, which is pretty funny, because while there is about as much rationale for him being emperor as for not being emperor, those that believe he is not do so with respect to a system that also has about as much rationale for existence as not. Theirs is also a system that came into being at about the same time as they were dealing that same Ottoman Empire the deathblow (The Great Game) that it would finally die of in 1924, when the Ottoman dynasty was expelled from Turkey.[2] Theirs came into being by virtue of the excesses of that same Great Game, and other military "exploits" like it, which brought about a desire to establish overt military takeovers as subservient to "national sovereignty". All too late for the Ottoman Empire, again with the irony. Europe was once again to sweep through the area once more of course (and for what one can only hope, the last time), this time bearing a banner not of religion, nor adventurism, but democracy, to justify taking over countries by military force. Which just shows that those inventive Americans, at least of the ruling class, never let social progress get them down; if life gives you lemons (democracy), turn it into lemonade (spreading democracy).

The ironically named Ottomanism (ironic because it was actually the spread of Europeanism) put paid to lineage practices that Europeans came to call barbaric. It is not too much of a stretch to compare the Ottoman practice of succession (or the succession of European states on occasion, for that matter) to that of the fictional Klingons. It was costly to the lives and political options of able leaders, as it required a great deal of effort to defend not only their Sanjaks, but their prestige, and their literal proximity to the throne.

The early period of the Ottoman Dynasty had a historical tradition of open succession[3] and other atypical succession practices. During their father's lifetime, all of the adult sons of the reigning sultan would hold provincial governorships. While females were excluded from the throne, the mothers of governors eligible for the throne would accompany and mentor them while they pursued the Ghazw raiding that won them prestige and gained them followers. Upon the death of their father, the sons and their followers would vie for the throne. This was ameliorated to a great extent by a common understanding of who was favored for succession, as was made clear by appointments by the current leader of favored sons to governerships near the capital. As it was easier for troops there to move to and hold the capital than it was for troops elsewhere to travel to and take it, being given the favored governership was in many ways the same as being given the right of succession.

Post-expulsion pretenders (WP) to the Ottoman throne mark their right to succession by linear descent from AbdÃ¼lmecid I, through one of his sons, AbdÃ¼lmecid II and AbdÃ¼laziz.[4]

Since 2009, the current linear descendant of AbdÃ¼lmecid, head of the Ottoman Dynasty and pretender to the defunct Ottoman throne has been Bayezid Osman (b. 1924), a great-grandson of AbdÃ¼lmecid I.[5] According to genealogies on the House of Ottoman there are currently twenty-four people in the line of succession after Bayezid Osman. 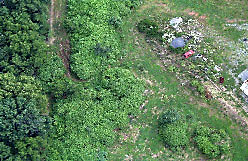 Photo of a "Rebel" marijuana crop, taken by a US Department of Justice employee, during the course of their official duties

In 1969, US President Richard Nixon approved Operation Intercept, to destroy Mexican marijuana plantations. He did not bother asking the Mexican government for permission beforehand. Marijuana (WP) drug cultivation in the US now exceeds that of Mexico.[6][7]

The power of US threats-as-diplomacy in global negotiations, trade or military, as evidenced by the fact that by the mid-70s, Mexico was a willing and active participant in programs aimed at eradicating cannabis plantations.

File:Chc bell 206.jpg
Bell 206 helicopter, one of two models sent by the US State Department to Mexico in 1975 to spray Paraquat and kill growers

In 1975, despite being warned by the Health Department to not allow the Mexican government to use the poisonous weed killer Paraquat in anti-narcotics operations, the State Department sent an official to Mexico to show operatives there how to more efficiently spray marijuana fields there with Paraquat from the air, in blue and white helicopters supplied by the USA.[8][9] Mexico also sprayed bullets onto Mexican fields, and into Mexican growers, from some of that $21 million worth of helicopters, converted into gunships.[8] 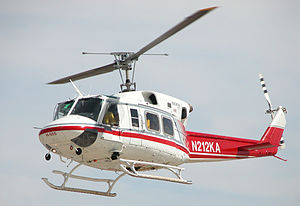 The Bell 212 model. It is not stated whether one or both models were used as gunships, although the 212 is widely used by governments, and both the US and Canadian military

In 1978, the State Department claimed it had ceased all operations of this type, but the Drug Enforcement Agency DEA (WP) took up Paraquat spraying again in 1988.[10] It continues to be used in drug field eradication programs, not only in other countries, where the US acts with lesser regard for the life and health of the inhabitants, but in the US as well.[11][12]

Since much of this was subsequently smoked by Americans as cannabis, the US government's "Paraquat Pot" program stirred much debate. Perhaps in an attempt to deter people from using marijuana, representatives of the program warned that spraying rendered the crop unsafe to smoke.

An United States Environmental Protection Agency manual states: "... toxic effects caused by this mechanism have been either very rare or nonexistent. Most paraquat that contaminates marijuana is pyrolyzed during smoking to dipyridyl, which is a product of combustion of the leaf material itself (including cannabis) and presents little toxic hazard."[13] The amount of dipyridyl released by each process is not noted.

Statements by the National Institutes of Health (NIH) (WP) contradict the EPA findings about the pyrolysis products of paraquat, finding that the product by pyrolysis, dipyridyl, is hazardous to human health. [14]

A 1995 study stated: "no lung or other injury in marijuana users has ever been attributed to paraquat contamination".[15]

More research into the effects of pyrolized herbicides is needed as they are also used to spray tobacco, and have continued to be used in anti-narcotics campaigns throughout the world. Paraquat spraying affects nearby crops as well, usually the cocoa, coffee, and tea grown in the same highland areas that are conducive to marijuana cultivation.[12]

USA government decides on Haitian election candidates; Hillary Clinton draws the short straw, and breaks the bad news to Haiti: The guy you wrote in as a joke, Michel Martelly? He's now the other guy that you have to vote for instead of Aristide, or Fanmi Lavalas, or Rene Praval, or Jude Celestin, or whoever we get rid of next

Way back in 2009, the Fanmi Lavalas party, closest to Jean-Bertrand Aristide, was forbidden participation in Haiti's November '10 elections by the provisional election council created by the current president, Rene Praval. But not content with that assassination of democracy, and under cover of the Egyptian protests, the US, to the orchestrated swell of allegations of voter fraud as a pretext for runoff elections, pressured Haiti to remove Jude Celestin, the candidate least affiliated with right-wing Haitian government, US-backed Haitian governments, Haitian dictators, or all three.[16][17] [18] [19] [20] [21] [22][20][23] [24] Michel Martelly and Mirlande Manigat will face each other in the revised election.

INITE campaign poster for the 2010 elections picturing Jude Celestin and his non-winning smile, with some of the heavy machinery that will soon no longer be at his disposal, but hopefully will not be sold off to the highest bidder before Haiti can rebuild itself, Photoshopped in behind him

"The decision was made after the Obama administration and the Organization of American States pressured Haiti not to include government-backed candidate Jude Celestin in the run-off, although he received more votes than Martelly. OAS claimed that Celestin had benefited from vote rigging and fraud. On Sunday, U.S. Secretary of State Hillary Clinton traveled to Haiti to personally pressure Haitian President RenÃ© PrÃ©val not to include Celestin in the runoff. But many organizations, including the Congressional Black Caucus, have criticized the Obama administrationâ€™s stance. Mark Weisbrot, of the Center for Economic and Policy Research, said it was a disgrace that, "the richest country in the world has forced one of the poorest to change the results of its presidential election, literally under the threat of starvation." Haitiâ€™s presidential election process has also come under intense criticism in part because candidates of former President Juan-Bertrand Aristideâ€™s Lavalas Party were banned from running." - Democracy Now! - 4 Feb '11

Jude Celestin was the only candidate without a Wikipedia article until the 10th of March, 2011.

On January 27, various reports claimed that access to the Internet in the entire country had been shut down.[27] The authorities responsible achieved this by shutting down the country's official Domain Name System, in an attempt to stop mobilisation for anti-government protests.[28] Later reports stated that almost all Wikipedia:BGP announcements out of the country had been withdrawn, almost completely disconnecting the country from the global Internet, with only a single major provider, Wikipedia:Noor Data Networks, remaining up.[29][30][31]

The Hacktivism group Anonymous displayed the altruistic side of direct action for the uninitiated, with techniques used in the 1989 Beijing protests, to update Egyptians behind the information 'Iron Curtain' as Andy Greenberg dubbed it;[32] Egypt's loss of internet access had kept them from news about WikiLeaks-intercepted Egyptian diplomatic cables, but Anonymous ducked under the obstruction with a low-tech solution: Faxes.[32]

Too new
(Much of this story is just breaking. News and of course, links to get you to the pros)
Operation Avenge Assange#Africa


Anonymous began supporting the North African protestors; websites of the Tunisian Ministry of Industry and its Stock Exchange were taken down.[33] Anonymous noted Tunisia's "outrageous level of censorship";[33]Reporters without Borders (WP) counts it 164th out of 178 countries for press freedom.[34] On January 3, 2011 Anonymous group brought down a Zimbabwean government website after President Robert Mugabe's wife, Grace Mugabe, sued a newspaper for US $15 million for publishing a WikiLeaks cable that linked her with the alleged trade in illicit diamonds.[35]
Running the Egyptian internet blockade

Anonymous kept up the pace, and even changed up the game considerably to show the Robin Hood side of direct action, using techniques used in the 1989 Beijing protests to update Egyptians behind the information 'Iron Curtain' as Andy Greenberg dubbed it;[32] Egypt's loss of internet access had kept them from news about WikiLeaks-intercepted Egyptian diplomatic cables, but Anonymous ducked under the obstruction with a low-tech solution: Faxes.[32]
Archived by Anarchangel 22:56, 2 February 2011 (UTC)

Venesat-1 is the first Venezuelan satellite. It was launched at 16:53 UTC on October 29, 2008 by a Chinese Chang Zheng 3B launch vehicle from the Peopleâ€™s Republic of China's Xichang Satellite Launch Center (XSLC). The satellite is built by the China Aerospace Science and Technology Corporation (CASC). VENESAT-1 is the UN official designation. In Venezuela it is named "Simon Bolivar" to commemorate Latin America's 19th Century independence leader. It is PRC's first contract of manufacture and space launching service for a Latin American nation.
Retrieved from "http://eng.anarchopedia.org/index.php?title=Anarchopedia:Article_in_the_news_archive&oldid=58165"
Categories: