From Anarchopedia
(Redirected from List of military interventions by the US)
Jump to: navigation, search 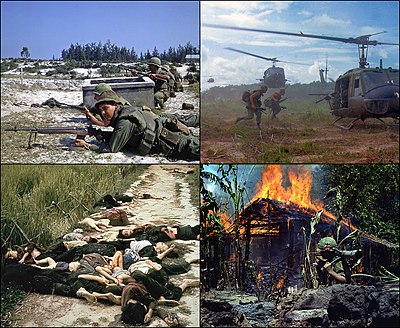 Clockwise, from top left: U.S. Marines battle in Hamo village during the Tet Offensive, extraction of troops after an airmobile assault, a burning Viet Cong base camp in Má»¹ Tho, Vietnamese civilians killed by U.S. troops during the My Lai Massacre
United States' military actions and war crimes of violence against living persons that are unlawful under international law, from the First World War onwards.

Invasions, coups, wars and other sustained military actions against states after 1945 without international mandate for exception are illegal under the spirit of international law according to the precedent set by the Nuremberg trials Nuremberg Principles Principle VI (a) (i) : "War of aggression".

These are also Acts of Agression, crimes under the precedent set by the United Nations General Assembly Resolution 3314

War crimes are "violations of the laws or customs of war"; including but not limited to "murder, the ill-treatment or deportation of civilian residents of an occupied territory to slave labor camps", "the murder or ill-treatment of prisoners of war", the killing of hostages, "the wanton destruction of cities, towns and villages, and any devastation not justified by military, or civilian necessity".

Incidents in WWII involving desecration of Japanese remains, and other such non-military actions are not listed in the Timeline, but are linked in the See Also section.

The numbers dead are rarely large for regime change; comparisons between the importance of the dead and the loss of democratic and socialist governments are unlikely to be uncontroversial, but quite likely to be thought-provoking.

The USA engaged in more than 20 covert military actions designed to cause instability in governments in half century between the formation of the early incarnations of the CIA the end of the Cold War, the great majority involving the Special Activities Division (SAD) and Special Operations Group (SOG) of the Central Intelligence Agency. During that period it mounted two full-scale invasions: the Korean and Viet Nam wars. The pace of its actions has increased, and the amount of overt actions increased since then; the US has engaged in closer to 30 military actions in the two decades since the end of the Cold War, and six full-scale invasions: the Gulf War, the invasion of Panama, the bombing of Yugoslavia, the Somali Civil War, the Iraq War, and the War in Afghanistan.

After the Cold War, the CIA's role changed significantly, and SAD and SOG forces were increasingly used in overt warfare, while covert regime change was more often carried out by the covert non-military divisions of the CIA, using destabilization techniques (propaganda, paid protestors, bribes, blackmail and threats of government officials, black propaganda and control of the press, etc).

"I spent 33 years and four months in active military service and during that period I spent most of my time as a high class muscle man for Big Business, for [[Wall Street and the bankers. In short, I was a racketeer, a gangster for capitalism. I helped make Mexico and especially Tampico safe for American oil interests in 1914. I helped make Haiti and Cuba a decent place for the National City Bank boys to collect revenues in. I helped in the raping of half a dozen Central American republics for the benefit of Wall Street. I helped purify Nicaragua for the International Banking House of Brown Brothers in 1902-1912. I brought light to the Dominican Republic for the American sugar interests in 1916. I helped make Honduras right for the American fruit companies in 1903. In China in 1927 I helped see to it that Standard Oil went on its way unmolested. Looking back on it, I might have given Al Capone a few hints. The best he could do was to operate his racket in three districts. I operated on three continents." 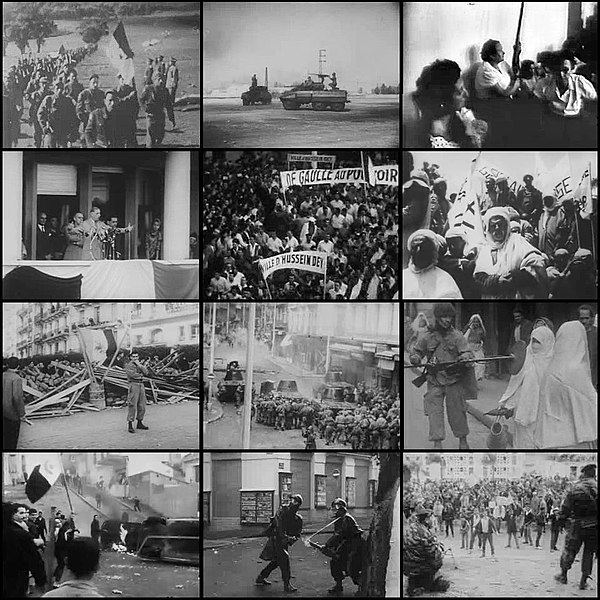 Revolutionary war really is a messy business; left-wing historians ignore death tolls and killing civilians altogether or capitulate to the mainstream view of it being genetically linked to communism. The first step in reducing the bloodshed is understand how and why it occurs, but no. So one of the stories left to history of Angola is tales by a missionary of the godless communists strafing peasants with a helicopter gunship (no mention of how many times more than one that happened, of course). See Angola 1980s on Wikipedia. And of course it is the only story about Angola in the WP article. 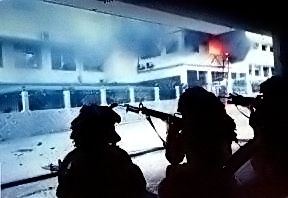 Rangers from Charlie Company, 3rd Battalion, 75th Ranger Regiment, US Army, prepare to take La Comandancia in the El Chorrillo neighborhood of Panama City during the invasion of Panama of December 1989

Propaganda poster, Regime of the Colonels-era Greece. Similarities to the logo below are more than coincidence, see Wikipedia:Operation Gladio#Greece

The Shah denied his useful tools the Kurds refuge in Iran, even as many were slaughtered. The U.S. decided not to press the issue with the Shah.[26] "Covert action should not be confused with missionary work," declared Secretary of State Henry Kissinger. [27]

Logo of Operation Gladio, sponsor of the Regime of the Colonels government (propaganda poster shown above); the more derogatory word 'junta' is sometimes used

Taking the question to be whether, in any such meetings, ChÃ¡vez opponents sought help from the embassy or the Department for removing or undermining the ChÃ¡vez government through undemocratic or unconstitutional means, the answer is no.
Which leaves unsaid whether regime change was attempted through 'democratic or constitutional' means. One also may assume a degree of latitude in the interpretation of that phrase from a person using such evasion.[98][99]

U.S. intelligence sources told The Post that CIA and European intelligence services are quietly giving money and logistical support to organizers of the anti-Syrian protests to ramp up the pressure on Syrian President Bashar al-Assad to completely quit Lebanon[102][103][104] The Wikipedia:Cedar Revolution followed, and is thus claimed to have been influenced by the CIA.

File:Bundesarchiv Bild 101I-179-1552-13, Griechenland, erhÃ¤ngter Mann in Ortschaft.jpg
Greece, 1943: A member of the nationalist and pro-Nazi Security Battalions stands for the photograph; the hanged man was executed for aiding the Greek Resistance. During this period, the Resistance cause attracted communists in large numbers, reaching a peak of 50,000; the anti-communists were attracted to the collaborationist Security Battalions, and never comprised more than 12,000 of Resistance members.[105] The US began backing all resistance groups in order to oppose the threat of Nazism, but their fear of communism was too strong, and soon the US ceased funding any resistance groups other than anti-communist ones. In 1948, President Harry S. Truman authorized the pre-CIA Office of Policy Coordination to support aid to Greek anti-communists in cooperation with Britain's Secret Intelligence Service. The US Army Military Assistance Advisory Group (MAAG) also provided personnel

In May 2007, US officials promised to continue funding a $84 million aid package aimed at improving the fighting ability of the Abbas Presidential Guard loyal to Fatah.[108][109][110][111]
In the April 2008 the journalist David Rose suggested that the United States collaborated with the Palestinian Authority and Israel to attempt a coup on Hamas, and Hamas pre-empted the coup.[112] Hamas Foreign Minister Dr. Mahmoud al-Zahar has echoed this view, and called the arming of Fatah by the United States an "American coup d'Ã©tat".[113]

Venezuela claims that a confidential memorandum (concerning Operation Pliers) from the US embassy to the CIA revealed and circulated by the Venezuelan government on November 26, 2007 provides details on the activity of a CIA unit engaged in clandestine action to destabilize the forth-coming national referendum and to coordinate the civil and military overthrow of the democratically-elected government of Venezuela.[114][115][116][117] The memo shows the US Embassy spending $8 million dollars in propaganda alone.[114]