From Anarchopedia
Jump to: navigation, search
File:Switch off internet in case of political dissent.jpg
Satirical graphic made in reaction to the internet blackout in Egypt

On January 27, various reports claimed that access to the Internet in the entire country had been shut down.[3] The authorities responsible achieved this by shutting down the country's official Domain Name System, in an attempt to stop mobilisation for anti-government protests.[4] Later reports stated that almost all Wikipedia:BGP announcements out of the country had been withdrawn, almost completely disconnecting the country from the global Internet, with only a single major provider, Wikipedia:Noor Data Networks, remaining up.[5][6][7]

The Hacktivism group Anonymous displayed the altruistic side of direct action for the uninitiated, with techniques used in the 1989 Beijing protests, to update Egyptians behind the information 'Iron Curtain' as Andy Greenberg dubbed it;[8] Egypt's loss of internet access had kept them from news about WikiLeaks-intercepted Egyptian diplomatic cables, but Anonymous ducked under the obstruction with a low-tech solution: Faxes.[8]

The New Hampshire (United States)-based network security firm Renesys reported that the five major Egyptian service providers--Wikipedia:Telecom Egypt, Wikipedia:Vodafone/Raya, Wikipedia:Link Egypt, Wikipedia:Etisalat Misr, and Wikipedia:Internet Egypt--all went dark one after the other between 22:12 and 22:25 UTC (12:12-12:25 a.m. Friday 28 January Cairo time). As a result, approximately 93% of all Egyptian networks were unreachable as of late afternoon.[7] The shutdown happened within the space of a few tens of minutes, not instantaneously, which Renesys interpreted as companies receiving phone calls one at a time, ordering them to shutdown access, rather than an automated system taking all providers down at once.[7]

Analysis by BGPMon[9] showed that only 26 BGP routes of the registered 2903 routes to Egyptian networks remained active after the blackout was first noticed; this is an estimate of 88% of the whole Egyptian network disconnected. RIPE NCC has two graphs of routing activity from Egypt, announcements/withdrawals and available prefixes, including a snapshot of activity during the shutdown.[10]

Internet service providers such as the French Data Network (FDN) provided free (zero-cost) dial-up access to Egyptians with landline (analogue) international telephone access. FDN provided the service as a matter of principle, to "contribute to the freedom of expression of the Egyptian people and allow them to keep a connection with the rest of the world."[12] 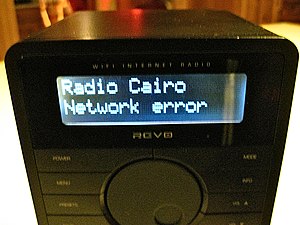 Beginning on the first day of protests the Egyptian government censored most of the media outlets inside Egypt and took measures to block social media websites[14] which had helped protesters to spread news about the events on the ground. On 27 January, it was reported that the government had blocked text messaging and BlackBerry messaging services.[15] Starting just after midnight local time on the night of 27/28 January[16] the Egyptian government almost entirely cut off Internet access[16][17][18] in an act of unprecedented[16][17] Internet censorship. Virtually all of Egypt's Internet addresses were unreachable, worldwide.[19][20] In response, Egyptians, with the help of assorted hacktivists worldwide,[21] circumvented the restrictions by variously using the Tor anonymity network,[22] smartphones as modems, land lines with dial-up modems to make international calls to access the internet, fax machines in universities and embassies, and even ham radio.[23] After Egypt's last functional internet service provider, Noor Data Networks, finally went offline,[24] the internet activist group Telecomix rated Egyptian internet access on par with that of North Korea and Burma.[25]

On 1 February, Google and Twitter launched the so-called speak-to-tweet system that allows people caught up in the unrest to post messages, without any need to use an internet connection, by dialing an international telephone number and leaving a voicemail message. The message is then sent out as a tweet with the hashtag of the #state, where the call came from.[26] Twitter was used by a large number of users outside Egypt for up-to-the-minute commentary on the situation and several news sources provided real-time coverage. But few people from inside the country use Twitter (there are only 14,000 Twitter users in Egypt, according to the social media firm Sysomos.[27]). Twitter has set up a new account @twitterglobalpr to talk specifically about Egypt's use of the tool[28] after it was blocked on 25 January.[29]