A drop weapon is a weapon carried by a soldier for the purpose of creating false evidence (WP), placing it on or near a slain individual to make that person appear to be an enemy combatant or insurgent. Alternatively, a drop weapon or other item is left in the open; any individual who picks it up may be fired upon; a process known as baiting.[1]

The use of drop weapons has been the cause of some controversy in the Iraq War.[2][3]

Baiting is a similar procedure, in that the perpetrator leaves items on the ground, but it has far different ramifications. Items are left for people in the area to find and pick up; doing so is considered evidence of insurgency. This is despite there being a multitude of reasons for them to do so, including simple curiousity and importantly, the desire to AVOID being branded as insurgents because of damning evidence left outside their houses. Rather than falsification of evidence, baiting creates the danger of legal entrapment (WP) for the perpetrator, and thus illegal killing of the victim. According to documents quoted by the Washington Post,[4] the U.S. military's Asymmetric Warfare Group (WP) encouraged snipers to drop items "such as detonation cords, plastic explosives and ammunition"[1] then kill Iraqis who handled the items.[1][2]

In one incident United States Army (WP) Sgt. Evan Vela was sentenced to a 10 year prison term for murder after being convicted of murdering an unarmed Iraqi and planting evidence.[5]

"Baiting is putting an object out there that we know they will use, with the intention of destroying the enemy...Basically, we would put an item out there and watch it. If someone found the item, picked it up and attempted to leave with the item, we would engage the individual as I saw this as a sign they would use the item against U.S. Forces." - Capt. Matthew P. Didier, the leader of an elite sniper scout platoon attached to the 1st Battalion of the 501st Infantry Regiment, in a sworn statement. Josh White and Joshua Partlow, Washington Post Staff Writers, Monday, September 24, 2007 , in the Washington Post[1]

The Asymmetric Warfare Group is said by Captain Didier to have sent boxes of the kind normally used to hold ammunition filled with "drop items" to his unit, the 1st Battalion 501st Infantry Regiment in order "to disrupt the AIF [Anti-Iraq Forces] attempts at harming coalition forces and give us the upper hand in a fight."[1][6]

The Independent newspaper quoted a spokesperson for the US military as saying: "We don't discuss specific methods of targeting enemy combatants. The accused are charged with murder and wrongfully placing weapons on the remains of Iraqi nationals. There are no classified programmes that authorise the murder of local nationals and the use of 'drop weapons' to make killings appear legally justified."[6]

Spec. Jorge Sandoval, it was found by a military court, shot an Iraqi man, who was cutting grass with a rusty sickle, on the order of Staff Sgt. Michael Hensley. The two men then placed a spool of wire into the pocket of the dead man.[1] Hensley and Sandoval were charged with murder, of which they were acquitted and with planting evidence, of which they were found guilty.[5]

In the village of Jurf as Sakhr along the Euphrates River most of the sniper team chose an area to hide and sleep in. One of the members of the unit, Staff Sgt. Michael Hensley stayed on guard. While on his guard he witnessed an Iraqi man, Genei Nesir Khudair Al-Janabi,[5] slowing creeping towards the hide area where the other snipers were sleeping. At this point he put in a call to then-first-lieutenant Matthew P. Didier, for permission to make a "close kill". The request was authorized on a "as needed" basis. Hensley again ordered another man, Sgt. Evan Vela, to make the kill, and several minutes later Didier received word from of the kill from Hensley.

In court documents Hensley is quoted as saying "I thought that he was trying to alert insurgents," Hensley said. "I felt like I had no choice or we would be further compromised."[5]

The defense claimed two somewhat contradictory justifications: one, Vela was sleep-deprived, and did not mean to kill, and two, that he was ordered to by Hensley, and was only carrying out orders.[5]

An article on this subject was deleted by redirect on Wikipedia. See Wikipedia:Wikipedia:Articles for deletion/HÄ«t during the Iraq War

HÄ«t or Heet (Ù‡ÙŠØª) is a city in al-Anbar province, Iraq (WP). HÄ«t lies northwest of Ramadi, the provincial capital, in the Sunni Triangle. Along with other cities in Iraq, it was the target of a concentrated effort to throw money at the problem of the occupation of Iraq by US forces and the US puppet regime. The US army, after the third invasion of Iraq (the first being the covert support of Saddam Hussein's revolutionary forces by the CIA, in which they gave him information that would help him kill the communists in Iraq) were the instruments of this policy, dubbed "winning 'Hearts and Minds'" 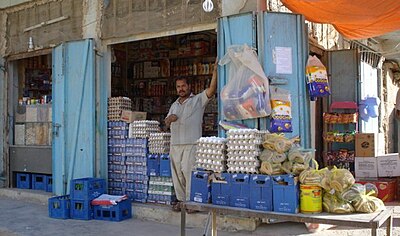 In the sense of it being a program that relied on a great deal of money to implement, that remained largely in the form of money, and to a lesser extent wage labor (WP) bought with money, throughout its execution, it was similar to the Importation subsidy (no WP equivalent) program initiated in Viet Nam (WP) by the Ngo Diem regime, before the start of the Viet Nam War (WP). The US paid for goods imported into Viet Nam, sold to local merchants at artificially low prices, and gave the proceeds to the Diem government, on loan. In this way, the US in particular and the Diem government by extension was made more popular with the merchant class, the merchant class was financially empowered and politically motivated (bribed, in fact). The Vietnamese people would later be exposed to the Western lifestyle and attendant bribes in much the same way during the war, only with cigarettes and chewing gum.[7]

2nd Battalion 7th Marines (2/7) returned to the HÄ«t area from supporting Wikipedia:Operation Vigilant Resolve. Its focus of operations was to propagandize the occupation and buy off local leaders to get the maximum amount of control in the area. U.S. military sources suggest that 2/7 civil affairs efforts injected nearly $3 million USD into local reconstruction and security efforts. Control was further increased by training armed forces such as Iraqi National Guard units and police forces. Psy Ops forces were used in Hit in March 2007, the same month as the Task Force oversaw the successful delivery of five billion Iraqi Dinar to the Hit bank. In April, the Task Force paid out almost $100,000 to local HÄ«t business owners.

See the rest of the article, albeit one that is primarily US Armed Forces propgaganda, at US 'Hearts & Minds' campaign in HÄ«t, Iraq. The rest of the article was deemed of insufficient propaganda value to justify the leak of the information about the true nature of 'Hearts and Minds' as being bribes and payoffs, so that article was redirected to the city article. 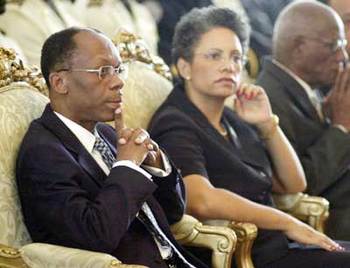 Jean-Bertrand Aristide and wife Mildred in 2004

Jean-Bertrand Aristide (born 15 July 1953) is a Haitian politician and former priest who served as Haiti's first democratically elected president. He was appointed to a parish in Port-au-Prince in 1982 after completing his studies, and became a favorite of the pro-democracy movement protesting Jean-Claude "Baby Doc" Duvalier's regime and the military transition regime which followed. He won the 1991 general election on 16th December 1990, with 67% of the vote, and was was sworn as President of Haiti in on 7 February 1991.

On 29 September 1991, he was deposed by the Haitian army in the 1991 Haitian coup d'Ã©tat. The coup regime collapsed in 1994 under US pressure and threat of force (Operation Uphold Democracy) after Aristide agreed to US demands to privatize nationalized infrastructure, fire members of his cabinet, and reconstitute trade tariffs in favor of the US. Aristide was then President again from 1994 to 1996 and from 2001 to 2004.

Aristide was again ousted in the February 2004 rebellion, in which former soldiers participated. He said the US had orchestrated a coup d'Ã©tat against him in revenge for his reneging on his promise to privatize nationalized infrastructure, and received support from, among others, several members of the US Congress and Jamaican Prime Minister P. J. Patterson. Aristide was forced into exile, being flown directly out of Haiti to the Central African Republic, eventually settling in South Africa.

Aristide has attempted to return to office many times over the years. The US continues to block his return, renewing its commitment to preventing him from taking office in Haiti on 21st January, 2011, even as Baby Doc Duvalier returned to Haiti in the wake of the chaos of 2010's earthquake and cholera epidemic.

Barack Obama is the 44th president of the United States who won the United States presidential elections of November 4, 2008. He was born on August 4, 1961 in Honolulu, Hawaii, to Barack Obama, Sr and Ann Dunham. He earned a law degree from Harvard in 1991 and worked as a lawyer in Chicago. Obama served in the Illinois state senate from 1996 to 2004 and was elected to the US Senate in 2004. Controversies associated with him include his claim regarding the liberation of the Auschwitz concentration camp, claim about a Life magazine article on his memoir Dreams From My Father and his relation with slumlord Tony Rezko.

Hotel Bauen is a worker-run four-star hotel in Buenos Aires, the capital and largest city of Argentina. It is a 20-story hotel established in 1978 by the Iurcovich family on loan from the then military dictatorship government and was well-known as a meeting venue for right-wing politicians. But the Iurcovich family did not pay back the loan and the hotel was sold to a Chilean company named Solari SA in 1997 which also did not pay the money. By 2001, the owners abandoned the hotel which left approximately 250 people unemployed. Finally the workers themselves reopened the hotel in 2003. They also fulfilled the legal safety requirements which was ignored by the capitalist owners. After the workers took control of the hotel, profits have also risen. Former lowest ranking staff, including cleaning people, dishwashers and receptionists, run the hotel democratically without any workplace hierarchy.

Gay and Lesbian Kingdom of the Coral Sea Islands[edit]