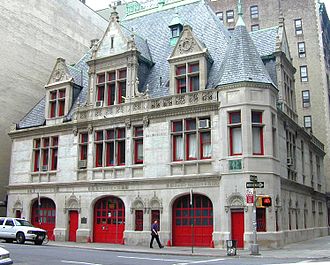 Democracy Now! is a United States (WP) daily progressive, nonprofit, independently syndicated program of analysis, and opinion,[1] aired by more than 1000 Wikipedia:radio, Wikipedia:television, satellite and cable TV networks in Wikipedia:North America.[2] The award-winning one-hour "War and Peace Report" is hosted by investigative journalists Wikipedia:Amy Goodman[3] and Juan Gonzalez.[2][4] The program is funded entirely through contributions from listeners, viewers, and foundations, and does not accept advertisers, corporate underwriting, or government funding.[2]

Democracy Now! was founded on 19 February 1996 at WBAI-FM in New York City by progressive journalists Amy Goodman (WP), Juan Gonzalez (WP), Larry Bensky, Salim Muwakkil, and Julie Drizin.[5] It originally aired on 5 Pacifica Radio stations.[1] Goodman is the program's principal host, with Juan Gonzalez as frequent co-host.[6] Jeremy Scahill (WP), an Wikipedia:investigative reporter for Wikipedia:The Nation, has been a frequent contributor since 1997.[1] The Spanish version includes the daily headlines, as well as a weekly summary of the news and was begun by Andres Thomas Conteris in May 2005. The program focuses on issues its producers consider underreported or ignored by mainstream news coverage. Democracy Now! began broadcasting on television every weekday shortly after September 11, 2001, and it is the only public media in the U.S. that airs simultaneously on satellite and cable television, radio, and the internet (WP).[7]

In November, 2009, Democracy Now! bid farewell to their broadcast studio in the DCTV converted firehouse building in New York City's Chinatown, where they had broadcast for 8 years.[8] The studio subsequently moved to a repurposed graphic arts building in the Chelsea District of Wikipedia:Manhattan.[8] In 2010, the new 8500-square-foot[9] Democracy Now! studio became the first radio or television studio in the nation to receive LEED Platinum certification,[10][11] the highest rating awarded by the Wikipedia:U.S. Green Building Council.

"I think it's probably the most significant progressive news institution that has come around in some time."- Wikipedia:Robert W. McChesney, quoted in Wikipedia:The Nation[16]

Democracy Now! and its staff have received several journalism awards, including the Wikipedia:Gracie Award from American Women in Radio & Television;[17] the Wikipedia:George Polk Award for its 1998 radio documentary Wikipedia:Drilling and Killing: Chevron and Nigeria's Oil Dictatorship, on the Wikipedia:Chevron Corporation and the deaths of two Wikipedia:Nigerian villagers protesting an oil spill;[18] and Goodman with Wikipedia:Allan Nairn won Robert F. Kennedy Memorial's First Prize in International Radio for their 1993 report, Massacre: The Story of East Timor which involved first-hand coverage of Wikipedia:genocide during the Wikipedia:Indonesian occupation of East Timor.[19]

On October 1, 2008, Goodman was named as a recipient of the 2008 Wikipedia:Right Livelihood Award,[20] in connection with her years of work establishing Democracy Now!.

Three journalists with Democracy Now!â€”including principal host Wikipedia:Amy Goodman, and news producers Nicole Salazar and Wikipedia:Sharif Abdel Kouddousâ€”were detained by police during their reporting on the 2008 Republican National Convention protests.[21] Salazar was filming as officers in full Wikipedia:riot gear charged her area. As she yelled "Press!" she was knocked down and told to put her face in the ground while another officer dragged her backward by her leg across the pavement. The video footage of the incident was immediately posted on the Internet, leading to a large public outcry against her arrest. When a second producer, Kouddous, approached, he too was arrested, and charged with a Wikipedia:felony. According to a press release by Democracy Now!, Goodman herself was arrested after confronting officers regarding the arrest of her colleagues. The officers had established a line of "crowd control," and ordered Goodman to move back. Goodman claims she was arrested after being pulled through the police line by an officer, and subsequently (as well as Kouddous) had her press credentials for the convention physically stripped from her by a Wikipedia:secret service agent.[22] All were held on charges of "probable cause for riot."[23] A statement was later released by the city announcing that all "misdemeanor charges for presence at an unlawful assembly for journalists" would be dropped. The felony charges against Salazar and Kouddous were also dropped.[24]

Goodman, Salazar, and Kouddous subsequently filed a lawsuit against the cities of St. Paul and Minneapolis as well as other defendants.[24] According to Baher Asmy of the Wikipedia:Center for Constitutional Rights, "[a]ll three plaintiffs that are journalists with Democracy Now reached a final settlement with the city of Minneapolis and St. Paul, and the United States Secret Service, that will resolve the claims that they had against them from unlawful and quite violent arrests." The settlement includes $100,000 in compensation and a promise of police training.[25]