The Geneva Conference (April 26 â€“ July 21, 1954) was held as soon as possible after the decisive battle of Dien Bien Phu. Any later, and the Viá»‡t Minh would have taken back Viet Nam completely, rendering a settlement there as useless to guarantee French concessions as the actual conference proved useless to guarantee the Vietnamese the right to their country. Hot and cold, the fighting for Viet Nam, since the first French military interventions, had been going on for over 166 years; it was destined to continue for over 20 more. Despite this overriding reason for calling the conference at that time, and probably naiive to that fact, many well-intentioned diplomats came to the conference with the aim in mind of at least, preventing a military slaughter of the remaining French forces, if not restoring Viet Nam, Laos, and Cambodia to their rightful peoples, and/or uniting Korea.[1] Representative of the Viet Namese, Laotians, and Cambodians, the USSR, France, the United Kingdom, and the People's Republic of China were in attendance throughout the whole conference. The United States showed up, but they never had any intention of abiding by any of the conference's agreements. By contrast, the 'Indochinese', with the right to the most say in the matter, were only allowed to participate when the discussion turned to their respective countries.[2] Attendees and participants in the Korean debate included the countries that sent troops through the UN to the Korean War and the various countries that ended the French Indochina War between France and the Vietminh. The part of the conference on the Korean question ended without adopting any decelerations or proposals. Some participants and analysts blame the U.S. for obstructing movements towards unification.[3][3][4] On Indochina, the conference produced a set of documents known as the Geneva Accords. These agreements created a dividing line to separate the French and Viá»‡t Minh forces; two zones, that were specifically guaranteed by the agreement to "in no way constitute a political or territorial boundary". A "Conference Final Declaration", issued by the British chairman of the conference, provided that a "general election" be held by July 1956 to create a unified Vietnamese state. Neither former emperor Báº£o Äáº¡i or the United States signed the agreement; according to the rule of 'silence indicates assent', they should have been, like any country or person, subject to the rulings of the Geneva Convention. In practice, however, all nations are 'rogue states', in that if they do not sign something, there is little that can be done to hold them to it, and sure enough, the United States and their puppet state in the South were soon to declare that because they had not signed anything, they had not agreed to anything. Because the agreement included provisions for elections, the United States was in fact refusing the democratic process, preferring to follow its usual Modus Operandi of violent regime change. In addition, three separate ceasefire accords, covering Cambodia, Laos, and Vietnam, were signed at the conference.

The armistice signed at the end of the Korean War required a political conference within 3 months - a timeline which was not met - "to settle through negotiation the questions of the withdrawal of all foreign forces from Korea, the peaceful settlement of the Korean question, etc."[5] 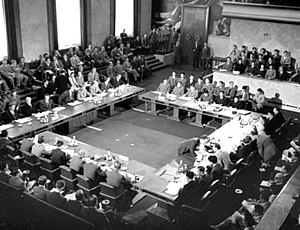 After the defeat of the Japanese Empire in 1945, the Provisional Government of the French Republic restored colonial rule in French Indochina. Nationalist and communist popular movements in Vietnam led to the First Indochina War in 1946. This colonial war between the French Union's Expeditionary Corps and Ho Chi Minh's Viet Minh guerrillas turned into a Cold War crisis in January 1950.[6] The communist Viet Minh received support from the newly proclaimed People's Republic of China and the Soviet Union, while France and the newly created Vietnamese National Army received support from the United States.

The Battle of Dien Bien Phu started on March 13 and continued during the conference. Its issue became a strategic turnover as both sides wanted to emerge as the victor and forge a favorable position for the planned negotiations about "the Indochinese problem". After fighting for 55 days the besieged French garrison was overrun and all French central positions were captured by the Viet Minh.

This war was significant in that it starkly demonstrated the reality that a western colonial power could be defeated by an indigenous revolutionary force; the French previously pacified a similar uprising in the Madagascar colony in March, 1947. A few months after the fall of Dien Bien Phu, troops were deployed in Algeria and a second guerrilla-warfare-based war of independence started in November 1954. Growing distrust and defiance among the army's Chief of Staff toward the Fourth French Republic after the contested defeat of the First Indochina War led to two military coups d'Ã©tat in March 1958 and April 1961. Most of the rebel Generals were Indochina veterans including their leader, Raoul Salan.

The South Korean representative proposed that the South Korean government was the only legal government in Korea, that UN-supervised elections should be held in the North, that Chinese forces should withdraw, and that UN forces - a belligerent party to the war - should remain as a police force. The North Korean representative suggested that elections be held throughout all of Korea, that all foreign forces leave beforehand, that the elections be run by an All-Korean Commission that is made-up of equal parts from North and South Korea, and to generally increase relations economically and culturally between the North and the South. The Chinese delegation proposed an amendment to have a group of "neutral nations" supervise the elections, which the North accepted. The U.S. supported the South Korean position and saying that the USSR wanted to turn North Korea into a puppet state. Most allies remained silent and at least one, Britain, thought that the U.S.-South Korean proposal would be deemed unreasonable.[7] The South Korean representative then made a new proposal where there would be all-Korea elections but that they would be held according to South Korean constitutional procedures and still under UN-supervision. June 15, the last day of the conference on the Korean question, the USSR and China both submitted declarations in support of a unified, democratic, independent Korea, and that negotiations to that end should resume at an appropriate time. The Belgium and the British delegation said that while they weren't going to accept "the Soviet and Chinese proposals, that did not mean a rejection of the ideas they contained."[8] In the end, however, no declaration was adopted. Some participants and analysts suggest that the U.S. obstructed efforts towards a peace agreement.[2][3] Korea remains divided to this day.

On April 27, 1954, the Conference produced a declaration which supported the territorial integrity and sovereignty of Indochina thereby granting its independence from France. In addition, the Conference declaration agreed upon the cessation of hostilities and foreign involvement (or troops) in internal Indochina affairs. Northern and southern zones were drawn into which opposing troops were to withdraw, to facilitate the cessation of hostilities between the Vietnamese forces and those that had supported the French. Viet Minh units, having advanced to the far south while fighting the French, retreated from these positions, in accordance with the Agreement, to north of the ceasefire line, awaiting unification on the basis of internationally supervised free elections to be held in July 1956[9]. Most of the French Union forces evacuated Vietnam, although much of the regional governmental infrastructure in the South was the same as it had been under the French administration. An International Control Commission was set up to oversee the implementation of the Geneva Accords, but it was essentially powerless to ensure compliance. It was to consist of India, Canada, and Poland.

The Geneva Agreements carefully worded the division of northern and southern Vietnam as a "provisional military demarcation line",[10][11] "on either side of which the forces of the two parties shall be regrouped after their withdrawal".[10][11] To specifically put aside any notion that it was a partition, they further stated, in the Final Declaration, Article 6: "The Conference recognizes that the essential purpose of the agreement relating to Vietnam is to settle military questions with a view to ending hostilities and that the military demarcation line is provisional and should not in any way be interpreted as constituting a political or territorial boundary"[10][11]

Then U.S. Under-Secretary of State Walter Bedell Smith said, "In connection with the statement in the Declaration concerning free elections in Vietnam, my government wishes to make clear its position which it has expressed in a Declaration made in Washington on June 29, 1954, as follows: 'In the case of nations now divided against their will, we shall continue to seek unity through free elections, supervised by the United Nations to ensure they are conducted fairly'"[11] This was only a month before the first ships of Operation Passage to Freedom set sail. They would have no reason to ferry people south if the US had intended for elections to take place as the Geneva Accords mandated, so the US must have had in mind to partition off the south and refuse to hold elections from the beginning, although whether the US Under-Secretary knew this is unknown.

Communist forces had been instrumental in the defeat of the French; the ideology of communism and nationalism were linked. Many viewed the South Vietnamese leadership as a French colonial and later an American puppet regime. Ho Chi Minh's Democratic Republic of Vietnam looked forward to being fairly comfortably elected in the elections.

The CIA Operation Passage to Freedom was a campaign of influence that relied not only on propaganda techniques, but also resorted to subterfuge and lies. It attempted to influence Catholic Vietnamese with slogans such as 'the Virgin Mary is moving South', but it also used Wikipedia:Black propaganda, distributing leaflets designed to look like they were actually from the Viet Minh. A large migration took place, assisted by the US with ships ferrying back and forth from the North to the South. 450,000 North Vietnamese, mostly Catholic, moved to south of the Accords-mandated ceasefire line. At the same time, 52,000 people from the south went north. Communist supporters were urged to remain in the south to vote in the coming elections.

The U.S. replaced the French as a political backup for Ngo Dinh Diem, then Prime Minister of the State of Vietnam and he asserted his power in the south. A referendum rigged by his brother Ngo Dinh Nhu saw Diem gain 98% of the vote, with 133% in Saigon. American advisors had suggested that he win by a lesser margin since it was felt that he would be able to win any fair poll against Emperor Báº£o Äáº¡i. Diem refused to hold the national elections, saying that the State of Vietnam never signed the Geneva Accords, and went about attempting to crush communist opposition. The prospect of democratic elections dwindling led South Vietnamese who opposed Diem to form the National Liberation Front better known as the Vietcong, which engaged in guerrilla attacks against the RVN government and desired the reunification of Vietnam under Communist rule. The Viá»‡t Cá»™ng were supported by the Vietnam People's Army (VPA) of the North.

Both sides violated provisions of the Accords, with both regimes engaging in military buildups contrary to them. Guerrilla activity in the South escalated, while U.S. military advisors continued to support the Army of the Republic of Vietnam, which was created as a replacement for the Vietnamese National Army. The result was the Second Indochina War, more commonly known as the Vietnam War.

The British and Communist Chinese delegations reached agreement on the sidelines of the Conference to upgrade their diplomatic relations.