From Anarchopedia
(Redirected from anarcha-feminism)
Jump to: navigation, search 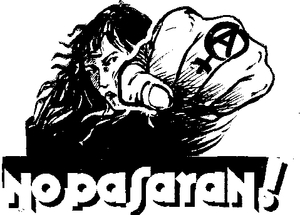 Radical feminism espouses belief that patriarchy is a fundamental problem in our society. Feminist anarchism, or anarcha-feminism a term created during second-wave feminism, views patriarchy as the first manifestation of hierarchy in human history; thus, the first form of oppression occurred in the dominance of male over female.

Anarcha-feminism is most often associated with early 20th-century authors and theorists such as Emma Goldman and Voltairine de Cleyre, although even early first-wave feminist Mary Wollstonecraft held proto-anarchist views. In the Spanish Civil War, an anarcha-feminist group, "Free Women", organized to defend both anarchist and feminist ideas.

Wendy McElroy is an example of a contemporary anarcho-capitalist feminist. An example of an anarcha-feminist is Emma Goldman.