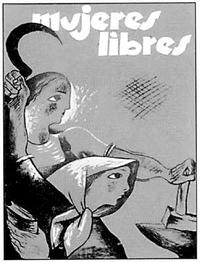 Mujeres Libres (English:Free Women) was an anarchist women's organization in Spain that aimed to empower working class women. It was founded in 1936 by LucÃ­a SÃ¡nchez Saornil, Mercedes Comaposada and Amparo Poch y GascÃ³n and had approximately 30,000 members. The organization was based on the idea of a "double struggle" for women's liberation and social revolution and argued that the two objectives were equally important and should be pursued in parallel. In revolutionary Spain of the 1930s, many anarchist women were angry with what they viewed as persistent sexism amongst anarchist men and their marginalized status within a movement that ostensibly sought to abolish domination and hierarchy. They saw women's problems as inseparable from the social problems of the day; while they shared their compaÃ±ero's desire for social revolution and vehemently opposed the Nationalists, they also pushed for recognition of women's abilities and organized in their communities to achieve that goal. Citing the anarchist assertion that the means of revolutionary struggle must model the desired organization of revolutionary society, they rejected mainstream Spanish anarchism's assertion that women's equality would follow automatically from the social revolution. To prepare women for leadership roles in the anarchist movement, they organized schools, women-only social groups and a women-only newspaper so that women could gain self-esteem and confidence in their abilities and network with one another to develop their political consciousness. Despite these activities, the group refused to identify itself as feminist due to feminism's perceived association with upper class, conservative women in Spain who called for bourgeoisie political reform. Unlike other leftist women's organizations in Spain at the time, the Mujeres Libres was unique in that it insisted on remaining autonomous from the male-dominated CNT, FAI, and FIJL and fought for equal status with these established anarchist organizations.

Mujeres Libres was a a name of thier anarchist feminist magazine. First edition of Mujeres Libres appears in 1936 May 2. The magazine Mujeres Libres went to the streets of Spain, where the essential ideas which drove the collective and their actions, were harvested.

In Barcelona, Mujeres Libres put in gear the "Casal de la Dona Treballadora" (the house of the working woman), between 600 and 800 such women attended, and midwifed the creation of a nursing school and the Louise Michel maternal infant institute. The Womens' Congress; Free and Libertarian.