The Workers Solidarity Movement is an anarchist organisation in Ireland broadly in the platformist tradition of Nestor Makhno. It was set up in 1984 and publishes the paper Workers Solidarity and the magazine Red and Black Revolution.

The Workers Solidarity Movement was founded in Dublin, Ireland in 1984 following discussions by a number of local anarchist groups from Dublin, Cork and Ballymena on the need for a national anarchist organisation. After a period of rapid initial growth it split in the late 1980's with some Cork members joining or rejoining the trotskyist Socialist Workers Party. At the time of the 1991 Gulf War it was relaunched but saw only a little growth in the early 1990's. In this period it was the main political organisation involved in the Dublin Abortion Rights Group which organised the successful 'X-case' demonstration which pressured the Irish courts to overturn an injunction preventing a pregnant 14-year-old rape victim from leaving Ireland to have an abortion in England.

In 1994 along with Militant it initated the Anti-Water Tax campaign in Dublin. This campaign grew rapidly in the three years to 1997 when it defeated the attempt to impose the new tax. At its height it claimed 60,000 households as paid members of the campaign. A WSM member, Gregor Kerr was the secretary of the campaign and although small the WSM played some role in the defeat of the tax. 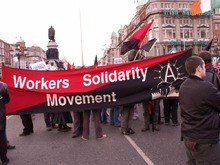 The WSM has been involved in a wide range of struggles in Ireland: its members are involved in their trade unions; have fought for abortion rights and against the growth of racism in Ireland. They have also been involved in campaigns in support of workers from countries as far apart as Nepal, Peru, Mexico and South Africa.

In November 2001 along with the Irish Mexico Group, Gluaiseacht, Anarcho-Syndicalist Federation, and the Alliance of Cork Anarchists, the WSM organised the first Grassroots Gathering in Dublin. The need for this emerged from involvement in struggles around globalisation and in particular the summit protest movement. WSM members took part in summit protests in Seattle, Prague, Brussels, Genoa and Seville and helped organise some of the related Reclaim the Streets events in Dublin.

In recent years the better known struggles the WSM were involved in included the 2003 March 1st action against US war planes in Shannon, the 2003 anti-bin tax struggle in Dublin and the 2004 EU Mayday protests also in Dublin as well as campaigning against the "citizenship referendum" in 2004. This period has seen a rapid growth in WSM membership making it one of the three significant revolutionary left groupings in Ireland today.

WSM members are currently involved in the Rossport Solidarity Camp as part of the Shell to Sea campaign. They are also involved in the Cork Autonomous Zone, Seomra Spraoi, the Terence Wheelock Campaign, Indymedia Ireland, the Independent Workers Union, Anti-War Ireland and the anti-Raytheon campaign in Derry. Although the WSM Autumn 2005 conference prioritised the IWU they also have members in SIPTU, CWU, TUI and the INTO.

The WSM has produced 96 issues of its paper Workers Solidarity. They distribute 6,500 copies of each issue of their free bi-monthly paper - mostly through door to door distribution and, to a lesser extent, at political demonstrations. In Spring 2007 it published the 12th issue of its magazine Red and Black Revolution which targets left-wing activists and has a much smaller circulation than Workers Solidarity of 1000 over two to three years. It has also published numerous pamphlets.

In their 2004 pamphlet 'Crossing the Border' Organise! criticised the WSM for being too influenced by Irish republicanism and of using language that threatened to alienate the northern Irish Protestant working class. Organise! have also criticised the WSM for supporting the election campaign of Des Derwin, a SIPTU activist who ran for a national position in SIPTU in 2002.

The role of the WSM in campaigns in Ireland has been attacked by the mainstream media on a number of occasions. On the 19 October 2003 the Sunday Independent Ireland's largest selling Sunday newspaper claimed that in relation to the Bin Tax campaign the WSM "had infiltrated the campaign in significant numbers". Ireland on Sunday, April 25th, 2004 tried to link WSM members with the WOMBLES in England in advance of the EU Mayday protests at the start of May that year. The same issue attacked another WSM member as an "unreconstructed left-wing die-hard." who "regularly contributes to anarchist and feminist websites and magazines" after she had appeared on the Pat Kenny show.