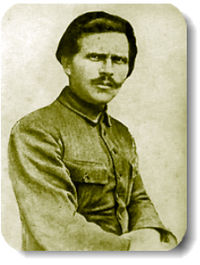 Nestor Makhno (October 27, 1889 – July 25, 1934) was an anarcho-communist revolutionary who leaded the Revolutionary Insurrectionary Army of Ukraine during the Russian Civil War.[1] He opposed the Bolsheviks after the October Revolution leading an extraordinary guerrilla campaign and was committed to form an anarchist society, resisting state authority, both capitalist and authoritarian Marxist.[1]

Nestor Makhno was born on October 27, 1889, into a poor peasant family in Gulyai-Polye, situated in the Ekaterinoslav province between the Dnieper River and the Sea of Azov.[2] His father died when he was only ten months old. Due to extreme poverty, he had to work as a shepherd at the age of seven. Makhno studied at the Second Hulyai Pole primary school in winter at the age of eight and worked for local landlords during the summer. He left school at the age of twelve and was employed as a farmhand on the estates of nobles and on the farms of wealthy peasants called kulaks.[3]

At the age of seventeen, he was employed in Hulyai Pole itself as an apprentice painter, then as a worker in a local iron foundry and, ultimately worked as a founder in the same organization. During this time he became involved in revolutionary politics. His involvement in revolutionary politics was based on his experiences of injustice at work and seeing the terror of the Tsarist regime during the 1905.[3] In 1906, he joined an anarchist organization in Hulyai Pole.[2] Makhno was arrested in 1906, tried, and acquitted, and was again arrested in 1907, but he could not be incriminated, and the charges were dropped. The third arrest came in 1908, when an infiltrator testified against him. In 1910 Makhno was sentenced to death by hanging, but the sentence was commuted to life imprisonment and he was sent to Butyrskaya prison in Moscow.[3] In prison he came under the influence of intellectual cell mate Piotr Arshinov.[3][4][5] He was released from prison after the February Revolution in 1917.[4]

After being liberated from prison, Makhno organized a peasants' union. It gave him a "Robin Hood" image and he expropriated large estates from landowners and distributed the land among the peasants.[5]

Hetman Pavlo Skoropadsky lost support of the Central Powers in the collapse of the German western front, saw his best forces evaporate, and was driven out of Kyiv by the Directory. In March 1918, the RIAU successful against the Germans, Austrians, Ukrainian Nationalists of Symon Petlura, and multiple regiments of the White Army. The brilliant victory over a much larger Austrian force established Makhno's reputation as a military tactician and he became known as "Batko" (father) to his people.[5]

At this point, the military role Makhno had adopted in the previous year shifted to an organizing one. The first congress of the Confederation of Anarchists Groups, under the name of Nabat ("the Bell"), issued five main points: rejection of all political parties, of all forms of dictatorships including the Marxist dogma of "Dictatorship by Proletariat", negation of the concept of state, rejection of any "transitional period" that may necessitate some dictatorship, self-management of all workers through free workers' councils (soviets). While the Bolsheviks argued that their concept of "Dictatorship by Proletariat" meant precisely "rule by workers' councils," the Makhnovist platform opposed the "temporary" Bolshevik measure of "Party dictatorship."

A White and Red counter-strike

Makhno had resisted the White Army's attempts to invade Ukraine from the South-West for three months before the Bolshevik Red Army units joined the war effort of the Makhnovshchina. But even after joining forces with the Red Army, the anarchists maintained their main political structures and refused to hold soviet elections or accept Bolshevik-appointed political commissars. The Red Army temporarily accepted these conditions, but soon Bolsheviks ceased to provide the Makhnovists with basic supplies, such as cereals and coal. The Nabat paper was banned and the Third Congress (specifically Pavel Dybenko) declared the Makhnovschina outlaw and counter-revolutionary, in response to which the Anarchist congress publicly questioned, "[M]ight laws exist as made by few persons so-called revolutionaries, allowing these to declare the outlawing of an entire people which is more revolutionary than them?" (Archinoff, The Makhnovist Movement). The justifications provided by the Bolshevik press for their break with the Anarchists were that Makhno's "anarchist state" was a warlord regime with civilian posts appointed (not elected) by Makhno and other military leaders, that Makhno himself had refused to provide food for Soviet railwaymen and telegraph operators, the "special section" of the anarchist constitution provided for secret executions and torture, that Makhno's forces had raided Red Army convoys for supplies, stolen an armored car from Briansk when asked to repair it, and that Nabat was responsible for deadly acts of terrorism in Russian cities.

Lenin soon sent Lev Kamenev to Ukraine, who conducted a cordial interview with Makhno. After Kamenev's departure, Makhno claimed to have intercepted two Bolshevik messages, the first an order to the Red Army to attack the Makhnovists, the second ordering Makhno's assassination. Soon after the Fourth Congress, Trotsky sent the clear order to arrest every congress member, then supposedly declared that "it's better to cede the entire Ukraine to Denikin (White Army) than to allow an expansion of Makhnovism" (quoted by Arshinov in his History of the The Makhnovist Movement). It is questionable that Trotsky would have preferred another White force to a non-aligned peasant army on the Ukrainian front, as the Reds were dealing with White and foreign invasions from all directions. Makhno's answer to the Red assault was to escape with his closest associates. Trotsky's forces were thereafter beaten by Denikin and so forced to withdraw from Ukraine. Makhno reformed his forces and pushed back Denikin's weakened White forces, saving the RIAU.

Having become powerful and popular, the Makhnovshchina turned again to the self-organization of the country, and pursued anarchist principles by destroying prisons and guardhouses and by granting freedom of speech, conscience, association, and the press. When nearly half of Makhno's troops were struck by a typhus epidemic, Trotsky resumed hostilities.

There was a new truce between Makhnovist forces and the Red Army in October 1920 when both forces came close to the territories held by Wrangel's White army. The Makhnovshchina still agreed to help the Red Army, but when the Whites were decisively eliminated in the Crimea, the communists turned on Makhno again. Makhno intercepted three messages from Lenin to Christian Rakovsky, the head of the Bolshevik government of Ukraine. Lenin's orders were to arrest all members of Makhno's organization and to try them as common criminals.

In August 1921, an exhausted Makhno was finally driven by the Bolsheviks into exile, fleeing to Romania, then Poland, Danzig, Berlin and finally to Paris. In 1926, joining other Russian exiles in Paris as part of the Group of Russian Anarchists Abroad (Ð“Ñ€ÑƒÐ¿Ð¿Ð° Ð ÑƒÑÑÐºÐ¸Ñ… ÐÐ½Ð°Ñ€Ñ…Ð¸ÑÑ‚Ð¾Ð² Ð—Ð°Ð³Ñ€Ð°Ð½Ð¸Ñ†ÐµÐ¹) who produced the monthly journal "Dielo Truda" (Ð”ÐµÐ»Ð¾ Ð¢Ñ€ÑƒÐ´Ð°, The Ð¡ause of Labour), Makhno co-wrote and co-published the Organizational Platform of the General Union of Anarchists (often referred to as the Organizational Platform of the Libertarian Communists), which put forward ideas on how anarchists should organize, based on the experiences of revolutionary Ukraine and the defeat at the hand of the Bolsheviks. The document was initially rejected by many anarchists, but today has a wide following. It remains controversial to this day, continuing to inspire some anarchists (notably the platformism tendency) because of the clarity and functionality of the structures it proposes, while drawing criticism from others (including, at the time of publication, Volin and Malatesta) who view its implications as too rigid and hierarchical.

At the end of his life Makhno lived in Paris and worked as a carpenter and stage-hand at the Paris Opera, at film-studios, and at the Renault factory. He died in Paris in 1934 from tuberculosis. He was cremated three days after his death, with five hundred people attending his funeral at the famous cimetiÃ¨re du PÃ¨re-Lachaise in Paris. Makhno's widow, along with his daughter Yelena, were deported to Germany for forced labor at the end of the WW2. After the end of the war they were arrested by the NKVD and taken to Kiev for trial in 1946 and sentenced to eight years of hard labor. They lived in Kazakhstan after their release in 1953.

Paul Robert Magocsi in his book A History of Ukraine accused Makhno along with the White army, the Ukrainian National Republic and forces loyal to the Bolsheviks for conducting pogroms against Jews in Ukraine during the civil war.[6] But this claim is disputed. Paul Avrich writes, "Maknno's alleged anti-Semitism...Charges of Jew-baiting and of anti-Jewish pogroms have come from every quarter, left, right, and center. Without exception, however, they are based on hearsay, rumor, or intentional slander, and remain undocumented and unproved."[7]

Makhno was a thoroughgoing anarchist and a down-to-earth peasant. He rejected metaphysical systems and abstract social theorizing.[4] He is described by Emma Goldman as "an extraordinary figure" leading a revolutionary peasants' movement.[8]