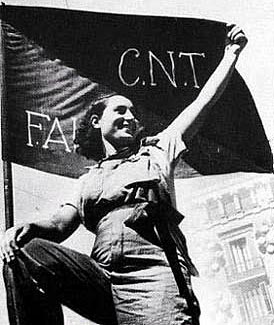 The Spanish Revolution of 1936 began during the outbreak of the Spanish Civil War. Much of Spain's economy was put under worker control; in anarchist strongholds like Catalonia, the figure was as high as 75%, but lower in areas with heavy Communist influence. Factories were run through worker committees, agrarian areas became collectivized and run as libertarian communes. It has been estimated by Sam Dolgoff, author of The Anarchist Collectives: Workers' Self-Management in the Spanish Revolution, that over 10 million people participated directly or at least indirectly in the Spanish Revolution. Even places like hotels, barber shops, and restaurants were collectivized and managed by their workers. George Orwell describes a scene in Aragon during this time period in his book Homage to Catalonia. [1]

"I had dropped more or less by chance into the only community of any size in Western Europe where political consciousness and disbelief in capitalism were more normal than their opposites. Up here in Aragon one was among tens of thousands of people, mainly though not entirely of working-class origin, all living at the same level and mingling on terms of equality. In theory it was perfect equality, and even in practice it was not far from it. There is a sense in which it would be true to say that one was experiencing a foretaste of Socialism, by which I mean that the prevailing mental atmosphere was that of Socialism. Many of the normal motives of civilized life--snobbishness, money-grubbing, fear of the boss, etc.--had simply ceased to exist. The ordinary class-division of society had disappeared to an extent that is almost unthinkable in the money-tainted air of England; there was no one there except the peasants and ourselves, and no one owned anyone else as his master."

Continuing, Orwell describes the general feel of the new society that was built within the shell of the old:

"This was in late December 1936, less than seven months ago as I write, and yet it is a period that has already receded into enormous distance. Later events have obliterated it much more completely than they have obliterated 1935, or 1905, for that matter. I had come to Spain with some notion of writing newspaper articles, but I had joined the militia almost immediately, because at that time and in that atmosphere it seemed the only conceivable thing to do. The Anarchists were still in virtual control of Catalonia and the revolution was still in full swing. To anyone who had been there since the beginning it probably seemed even in December or January that the revolutionary period was ending; but when one came straight from England the aspect of Barcelona was something startling and overwhelming. It was the first time that I had ever been in a town where the working class was in the saddle. Practically every building of any size had been seized by the workers and was draped with red flags and with the red and black flag of the Anarchists; every wall was scrawled with the hammer and sickle and with the initials of the revolutionary parties; almost every church had been gutted and its images burnt. Churches here and there were being systematically demolished by gangs of workman. Every shop and cafe had an inscription saying that it had been collectivized; even the bootblacks had been collectivized and their boxes painted red and black. Waiters and shop-walkers looked you in the face and treated you as an equal. Servile and even ceremonial forms of speech had temporarily disappeared. Nobody said 'Senor' or 'Don' or even 'Ãšsted'; everyone called everyone else 'Comrade' or 'Thou', and said 'Salud!' instead of 'Buenos dÃ­as'. Tipping had been forbidden by law since the time of Primo de Rivera; almost my first experience was receiving a lecture from a hotel manager for trying to tip a lift-boy. There were no private motor-cars, they had all been commandeered, and the trams and taxis and much of the other transport were painted red and black. The revolutionary posters were everywhere, flaming from the walls in clean reds and blues that made the few remaining advertisements look like daubs of mud. Down the Ramblas, the wide central artery of the town where crowds of people streamed constantly to and fro, the loud-speakers were bellowing revolutionary songs all day and far into the night. And it was the aspect of the crowds that was the queerest thing of all. In outward appearance it was a town in which the wealthy classes had practically ceased to exist. Except for a small number of women and foreigners there were no 'well-dressed' people at all. Practically everyone wore rough working-class clothes, or blue overalls or some variant of militia uniform. All this was queer and moving. There was much in this that I did not understand, in some ways I did not even like it, but I recognized it immediately as a state of affairs worth fighting for."

Here are just a few opinions of foreign journalists who have no personal connection with the Anarchist movement. Thus, Andrea Oltmares, professor in the University of Geneva, in the course of an address of some length, said:

"In the midst of the civil war the Anarchists have proved themselves to be political organisers of the first rank. They kindled in everyone the required sense of responsibility, and knew how, by eloquent appeals, to keep alive the spirit of sacrifice for the general welfare of the people. "As a Social Democrat I speak here with inner joy and sincere admiration of my experiences in Catalonia. The anti-capitalist transformation took place here without their having to resort to a dictatorship. The members of the syndicates are their own masters and carry on the production and the distribution of the products of labour under their own management, with the advice of technical experts in whom they have confidence. The enthusiasm of the workers is so great that they scorn any personal advantage and are concerned only for the welfare of all."

The well-known anti-Fascist, Carlo Roselli, who before Mussolini's accession to power was Professor of Economics in the University of Genoa, put his judgement into the following words:

"In three months Catalonia has been able to set up a new social order on the ruins of an ancient system. This is chiefly due to the Anarchists, who have revealed a quite remarkable sense of proportion, realistic understanding, and organising ability...all the revolutionary forces of Catalonia have united in a program of Syndicalist-Socialist character: socialisation of large industry; recognition of the small proprietor, workers' control...Anarcho-Syndicalism, hitherto so despised, has revealed itself as a great constructive force...I am not an Anarchist, but I regard it as my duty to express here my opinion of the Anarchists of Catalonia, who have all too often been represented to the world as a destructive, if not criminal, element. I was with them at the front, in the trenches, and I have learnt to admire them. The Catalonian Anarchists belong to the advance guard of the coming revolution. A new world was born with them, and it is a joy to serve that world."

And Fenner Brockway, Secretary of the I.L.P. in England who travelled to Spain after the May events in Catalonia (1937), expressed his impressions in the following words:

"I was impressed by the strength of the C.N.T. It was unnecessary to tell me that it was the largest and most vital of the working-class organisations in Spain. The large industries were clearly, in the main, in the hands of the C.N.T.--railways, road transport, shipping, engineering, textiles, electricity, building, agriculture. At Valencia the U.G.T. had a larger share of control than at Barcelona, but generally speaking the mass of manual workers belonged to the C.N.T. The U.G.T. membership was more of the type of the 'white-collar' worker...I was immensely impressed by the constructive revolutionary work which is being done by the C.N.T. Their achievement of workers' control in industry is an inspiration. One could take the example of the railways or engineering or textiles...There are still some Britishers and Americans who regard the Anarchists of Spain as impossible, undisciplined, uncontrollable. This is poles away from the truth. The Anarchists of Spain, through the C.N.T., are doing one of the biggest constructive jobs ever done by the working class. At the front they are fighting Fascism. Behind the front they are actually constructing the new Workers' Society. They see that the war against Fascism and the carrying through of the Social Revolution are inseparable. Those who have seen and understand what they are doing must honour them and be grateful to them. They are resisting Fascism. They are at the same time creating the New Workers' Order which is the only alternative to Fascism. That is surely the biggest things now being done by the workers in any part of the world." And in another place: "The great solidarity that existed amongst the Anarchists was due to each individual relying on his own strength and not depending on leadership. The organisations must, to be successful, be combined with a free-thinking people; not a mass, but free individuals."

Despite the critics clamoring for "maximum efficiency" rather than revolutionary methods, anarchic communes often produced more than before the collectivization. In Aragonia, for instance, the productivity increased by 20%.[2] The newly liberated zones worked on entirely libertarian principles; decisions were made through councils of ordinary citizens without any sort of bureaucracy (it should be noted that the CNT-FAI leadership was at this time not nearly as radical as the rank and file members responsible for these sweeping changes).

In addition to the economic revolution, there was a spirit of cultural revolution. Traditions some viewed as oppressive were done away with. For instance, women were allowed to have abortions, and the idea of "free love" became popular. In many ways, this spirit of cultural liberation prefigured that of the "New Left" movements of the 1960s.

As the war dragged on, the spirit of the revolution's early days flagged. In part, this was due to the policies of the Communist Party of Spain, which took its cues from the foreign ministry of Stalin's Soviet Union, the source of most of the foreign aid received by the Republican side. The Communist policy was that the war was not the time for the revolution, that until victory in the war was won the goal had to be the defeat of the Franco forces, not the abolition of capitalism, which was to be addressed once the war had been won. The other left-wing parties, particularly the anarchists and POUM, disagreed vehemently with this; to them the war and the revolution were one and the same. Militias of parties and groups which had spoken out too vociferously in opposition to the Soviet position on the war soon found further aid to have been cut off. Partially because of this, the situation in most Republican-held areas slowly began to revert largely to its prewar conditions; in many ways the "revolution" was over well before the triumph of the Franco forces in early 1939.