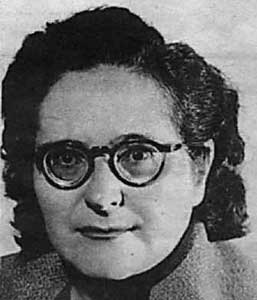 Federica Montseny i MaÃ±Ã© (February 12 1905, Madrid—January 14 1994) was a Spanish anarchist, intellectual and Minister of Health during the social revolution that occurred in Spain parallel to the Civil War. She is also known as a poet, novelist, essayist, and children's writer.

Federica Montseny was, in her own words, the [d]aughter of a family of old anarchists; her father was the anti-authoritarian writer and propagandist Joan Montseny (Federico Urales); her mother, Soledad Gustavo, was herself an anarchist activist.

She was the first ever female minister in the Spanish government, and as minister she aimed to transform public health to meet the needs of the poor and working class. To that end, she supported decentralized, locally responsive and preventative health care programs that mobilized the entire working class for the war effort. She was influenced by the anarchist sex reform movement, which since the 1920's had focused on reproductive rights, and was minister in 1936 when Dr. FÃ©lix MartÃ­ IbÃ¡Ã±ez, the anarchist director general of Health and Social Assistance of the Generalitat de Catalunya, issued the Eugenic Reform of Abortion, a decree effectively making abortion on demand legal in Catalonia.

Given her family libertarian tradition, the decision to enter the Popular Front government was especilly difficult. Although joining the government was a move encouraged by the anarcho-syndicalist ConfederaciÃ³n Nacional del Trabajo (CNT), this collaboration with the government in order to present a united front to the Fascist threat posed by Francisco Franco's rebel armies, was widely questioned during and long after the war was over. Notably, she was involved in polemics with Emma Goldman, and the recipient of the harsh criticism in Camillo Berneri's open letter of 1937. For many anarchists, the topic of collaboration — with both Marxists and governments — is still a contentious one.

She moved to France in 1939 where she wrote many books, only a fraction of which were political.