Anarchism and the Arts

Anarchism has long had an association with the creative arts, particularly in music and literature. It shares these traits with other radical political movements, such as socialism, communism and even fascism. Some of this art, like punk rock, would become partially co-opted by capitalist industry (a process called "recuperation" by the situationists). The famous social critic Zizek has defined this process as a "commodification of culture."

The influence of anarchism is not always directly a matter of specific imagery or public figures, but may be seen in a certain stance towards the liberation of the total human being and the imagination.

Anarchism had a large influence on French Symbolism of the late 19th century, such as that of StÃ©phane MallarmÃ©, who was quoting as saying "Je ne sais pas d'autre bombe, qu'un livre." (I know of no bomb other than the book.) Its ideas infiltrated the cafes and cabarets of turn of the century Paris (see the Drunken Boat #2).

More significantly, anarchists claim that 'strains' may be found in the works of the Dada group, whose anti-bourgeois art antics saw them wreaking havoc in war neutral Switzerland during World War I, although it could be argued that the Dadaists were much closer to the Council Communists, having much of their material published in Die Aktion.

Many white American artists of the early 20th century were influenced by anarchist ideas, if they weren't anarchists themselves. The Ashcan School of American realism included anarchist artists, as well as artists such as Rockwell Kent and George Bellows that were influenced by anarchist ideas. Abstract expressionism also included anarchist artists such as Mark Rothko and painters such as Jackson Pollock, who had adopted radical ideas during his experience as a muralist for the Works Progress Administration. Pollock's father had also been a Wobbly. 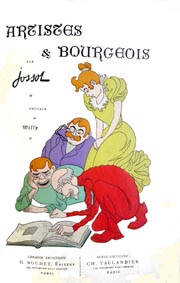 David Weir has argued in Anarchy and Culture that anarchism's only had some success in the sphere of cultural avant-gardism because of its failure as a political movement; cognizant of anarchism's claims to overcome the barrier between art and political activism, he neverthless suggests that this is not achieved in reality. Weir suggests that for the "ideologue" it might be possible to adapt "aesthetics to politics" but that "from the perspective of the poet" a solution might be to "adapt the politics to the aesthetics". He identifies this latter strategy with anarchism, on account of its individualism. Weir has also suggested that "the contemporary critical strategy of aestheticizing politics" among marxists such as Fredric Jameson is a product of the demise of marxism as a state ideology. "The situation whereby ideology attempts to operate outside of politics has already pointed Marxism toward postmodernist culture, just as anarchism moved into the culture of modernism when it ceased to have political validity".

In the late 20th century, anarchism and the arts could primarily be associated with the collage works by James Koehnline, Johan Humyn Being, and others, whose work was being published in anarchist magazines, including Anarchy: A Journal of Desire Armed and Fifth Estate. The Living Theatre, a theatrical troupe headed by Judith Malina and Julian Beck, were outspoken about their anarchism, often incorporating anarchistic themes into their performances.

In the 1990s, anarchists were involved in the mail art movement, which can be described as "art which uses the postal service in some way." This is related to the involvement of many anarchists in the zine movement. And many contemporary anarchists are involved in making art in the form of flyposters, stencils, and radical puppets.

Carlo CarrÃ 's best known work was The Funeral of the Anarchist Galli, painted in 1911. In the 1912 catalogue for the Futurists' first Parisian exhibition Umberto Boccioni remarked "the sheaves of lines corresponding to all the conflicting forces, following the general law of violence" which he labeled force lines encapsulating the Futurist idea of physical transcendentalism. Mark Antliff has suggested that this futurist aesthetic was "designed to involve the spectator in the very politics that led to Italy's intervention in World War I and, ultimately, to the rise of Fascism in Italy" 1. The art historian Giovanni Lista has identified this aesthetic as first appearing in the anarcho-syndicalist current, where Marinetti encountered the Sorelian "myths of action and violence."

"An anarchist world... a surrealist world: They are the same." —Andre Breton.

Anarchism has traditionally emphasized the liberation of the imagination and subjectivity from the constraints of the present social order, so it is no surprise that many anarchists are attracted to the work of the surrealists.

Surrealism is both an artistic and political movement aimed at the liberation of the human being from the constraints of capitalism, the state, and the cultural forces that limit the reign of the imagination. The movement developed in France in the wake of WWI with Andre Breton as its main theorist and poet. Originally it was tied closely to the Communist Party. Later, Breton, a close friend of Leon Trotsky, broke with the Communist Party.

A number of performers and artists have either been inspired by anarchist concepts, or have used the medium of music and sound in order to promote anarchist ideas and politics.

Punk rock is one movement that has taken much inspiration from the often potent imagery and symbolism associated with anarchism and situationist rhetoric, if not always the political theory. In the past few decades, anarchism has been closely associated with the punk rock movement, and has grown because of that association (whatever other effects that has had on the movement and the prejudiced pictures of it). Indeed, many anarchists were introduced to the ideas of Anarchism through that symbolism and the anti-authoritarian sentiment which many punk songs expressed.

Anarcho-punk, on the other hand, is a current that has been more explicitly engaged with anarchist politics, particularly in the case of bands such as Crass, Poison Girls, (early) Chumbawamba, The Ex, Flux of Pink Indians, Rudimentary Peni, Riot/Clone, Conflict, Propagandhi, etc. Many other bands, especially at the local level of unsigned groups, have taken on what is known as a "punk" or "DIY" ethic: that is, Doing It Yourself, indeed a popular Anarcho-punk slogan reads "DIY not EMI", a reference to a conscious rejection of the major record company. Some groups who began as 'anarcho-punk' have attempted to move their ideas into a more mainstream musical arena, for instance, Chumbawamba, who continue to support and promote anarchist politics despite now playing more dance music and pop influenced styles.

Techno music is also connected strongly to anarchists and eco-anarchists, as many of the events playing these types of music are self-organised and put on in contravention of national laws. Sometimes doors are pulled off empty warehouses and the insides transformed into illegal clubs with cheap (or free) entrance, types of music not heard elsewhere and quite often an abundance of different drugs. Other raves may be held outside, and are viewed negatively by the authorities. In the UK, the Criminal Justice Bill (1994) outlawed these events (raves) and brought together a coalition of socialists, ravers and direct actionists who opposed the introduction of this 'draconian' Act of Parliament by having a huge 'party&protest' in the Centre of London that descended into one of the largest riots of the 1990s in Britain. Digital hardcore, an electronic music genre, is also overtly anarchist; Atari Teenage Riot is the most widely recognized digital hardcore band. It should be noted that both Digital Hardcore, Techno and related genres are not the sole preserve of anarchists; people of many musical, political or recreational persuasions are involved in these musical scenes.

The genre of folk punk or "radical folk" has become increasingly prevalent in protest culture, with artists like the Riot-Folk! Collective and David Rovics openly asserting anarchist beliefs.

Artists and artworks inspired by anarchism[edit]