File:WW1 TitlePicture For Wikipedia Article.jpg
Clockwise from top: Trenches on the Western Front; a British Mark IV Tank crossing a trench; Royal Navy battleship HMS Irresistible sinking after striking a mine at the Battle of the Dardanelles; a Vickers machine gun crew with gas masks, and German Albatros D.III biplanes

World War I (WWI) or First World War (called at the time the Great War) was a major war centred on Europe that began in the summer of 1914. The fighting ended in November 1918. This conflict involved all of the world's great powers,[1] assembled in two opposing alliances: the Allies (centred around the Triple Entente) and the Central Powers.[2] More than 70 million military personnel, including 60 million Europeans, were mobilised in one of the largest wars in history.[3][4] More than 9 million combatants were killed, due largely to great technological advances in firepower without corresponding advances in mobility. It was the second deadliest conflict in Western history.[5]

The assassination on 28 June 1914 of Archduke Franz Ferdinand of Austria, the heir to the throne of Austria-Hungary, was the ostensible trigger of the war, but imperialistic foreign policies of the great powers of Europe, such as the German Empire, the Austro-Hungarian Empire, the Ottoman Empire, the Russian Empire, the British Empire, France, and Italy, played a major role. The assassin, Gavrilo Princip, is in many less scrupulous historical accounts referred to as an Anarchist, but he is more correctly referred to as a Yugoslav nationalist Yugoslav nationalist. The assassination resulted in a Habsburg ultimatum against the Kingdom of Serbia.[6][7] Several alliances formed over the past decades were invoked, so within weeks the major powers were at war; via their colonies, the conflict soon spread around the world.

On 28 July, the conflict opened with the Austro-Hungarian invasion of Serbia,[8][9] followed by the German invasion of Belgium, Luxembourg and France; and a Russian attack against Germany. After the German march on Paris was brought to a halt, the Western Front settled into a static battle of attrition with a trench line that changed little until 1917. In the East, the Russian army successfully fought against the Austro-Hungarian forces but was forced back by the German army. Additional fronts opened after the Ottoman Empire joined the war in 1914, Italy and Bulgaria in 1915 and Romania in 1916. The Russian Empire collapsed in 1917, and Russia left the war after the October Revolution later that year. After a 1918 German offensive along the western front, United States forces entered the trenches and the Allies drove back the German armies in a series of successful offensives. Germany agreed to a cease-fire on 11 November 1918, later known as Armistice Day.

By the war's end, four major imperial powersâ€”the German, Russian, Austro-Hungarian and Ottoman Empiresâ€”had been militarily and politically defeated. The latter two ceased to exist.[10] The revolutionised Soviet Union emerged from the Russian Empire, while the map of central Europe was completely redrawn into numerous smaller states.[11] The League of Nations was formed in the hope of preventing another such conflict. The European nationalism spawned by the war and the breakup of empires, and the repercussions of Germany's defeat and the Treaty of Versailles led to the beginning of World War II in 1939.[12]

Before World War II, the war was also known as The Great War, The World War, or The War in Europe.[13] In France and Belgium, it was sometimes referred to as La Guerre du Droit (the War for Justice) or La Guerre Pour la Civilisation / de Oorlog tot de Beschaving (the War to Preserve Civilisation), especially on medals and commemorative monuments. The term of choice used by official histories of the war in Britain and Canada is First World War, while American histories generally use the term World War I.

The earliest known use of the term First World War appeared in September 1914 when German biologist and philosopher Ernst Haeckel said, "There is no doubt that the course and character of the feared "European War" ... will become the first world war in the full sense of the word."[14]

The terms World War I and First World War both became standard (in the United States and Britain respectively) beginning in about 1940 to 1942; prior to that, it was most commonly called The Great War.[15][16] 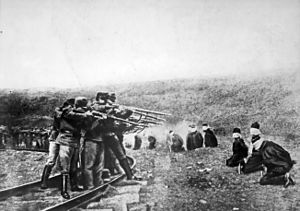 Austrian troops executing captured Serbians in 1917. Serbia lost about 850,000 people, a quarter of its prewar population, and half its prewar resources.[17]

1917 German poster: Wilhelm II blames the Allies for fighting on 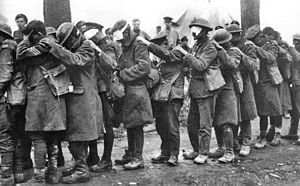 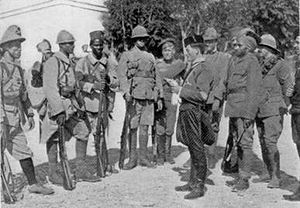 A battleship squadron of the Hochseeflotte at sea