This article is about legal limits to human expression. For other uses, see Disambiguation.

Censorship is the control of speech and other forms of human expression. It is most commonly applied to acts which occur in public circumstances, and generally involves a suppression of them by criminalizing their expression. What is censored may range from specific words to entire concepts, and the ostensible motive of censorship is to stabilize or improve the society over which the government has control.

Sanitization (removal) and whitewashing (from whitewash) are almost interchangeable terms that refer to particular a form of censorship via omission, which seeks to "clean up" the portrayal of particular issues and facts which are already known, but which may conflict with the official point of view. Political correctness may also become a form of censorship. 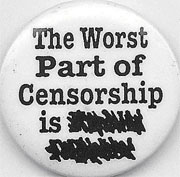 Censorship can be explicit, as in laws passed to prevent select positions from being published or propagated (as in Australia, the People's Republic of China, or Saudi Arabia where certain Internet pages are not permitted entry), or it can be implicit, taking the form of intimidation by government, where people are afraid to express or support certain opinions for fear of losing their lives, their jobs, their position in society, or their credibility. In this latter form it is similar to McCarthyism.

Wartime censorship is carried out with the intention of preventing the release of information that might be advantageous to the enemy. Typically it involves obfuscation of times or locations, or delaying the release of information (e.g. the objective of an operation) until it is of no possible use to enemy forces. Mention of weapons and equipment is another favourite area for censorship. The moral issues here are somewhat different as release of the information carries a high risk of increased casualties among one's own forces and possibly loss of the overall conflict.

A well-known example of sanitization policies comes from the USSR under Stalin, where publicly used photographs were often altered to remove people whom Stalin had ordered executed. Though past photographs may have been remembered or kept, this deliberate and systematic alteration of history in the public mind is seen as one of the central themes of Stalinism and totalitarianism. Censorship is a form of sanitization. Specifically, censorship refers to a socially accepted policy of eliminating material rejected as harmful.

The content of school textbooks is often the issue of debate, as their target audience is young people, and the term "whitewashing" is the one commonly used to refer to selective removal of critical or damaging evidence or comment. The reporting of military atrocities in history is extremely controversial, as in the case of Nanjing Massacre, the Holocaust (or Holocaust denial), and the Winter Soldier Investigation, regarding the Vietnam War. Also, the theory of evolution has been questioned by many since it contradicts the beliefs of their religion and some school boards have even been ordered to include disclaimers at the beginning of the book about it.

In each society the representation of its own flaws or misconduct is typically downplayed in favor of a nationalist or patriotic view. In the context of high-school level education, the presentation of facts and history greatly influences the interpretation of contemporary thought, opinion, and socialization. The legitimate argument for censoring the type of information disseminated is based on the inappropriateness of such material for certain younger age groups. The use of the "inappropriate" distinction is controversial, as well, as it can be used to enforce wider politically-motivated censorship.

"Censorship" comes from the ancient Roman language word "censor". The first reference to the term "whitewash" dates back to 1762 by a Boston Evening Post article. In 1800 the word was first used in a political context, when a Philadelphia Aurora editorial said that "if you do not whitewash President Adams speedily, the Democrats, like swarms of flies, will bespatter him all over, and make you both as speckled as a dirty wall, and as black as the devil."

The term "sanitization" is a euphemism commonly used in the political context of propaganda to refer to the doctoring of information that might otherwise be perceived as incriminating, self-contradictory, controversial, or damaging.

Censorship, unlike acts or policies of sanitization, refers to a publicly set standard, not a privately set standard. Censorship does not attempt to cover up material made by an organization, but rather to restrict or abolish defined types of material produced by private citizens.

Censorship is regarded as a typical feature of dictatorships and other authoritarian political systems. Democratic nations usually have far less institutionalized censorship, and instead promote the importance of freedom of speech.

Some thinkers understand censorship to include other attempts to suppress points of view or ideas such as negative propaganda, media manipulation, spin, disinformation or "free speech zones". These methods, collectively, tend to work by disseminating misleading information or by preventing other ideas from obtaining a receptive audience.

Others point out the suppression of access to the means of dissemination of ideas by governmental bodies such as the FCC in the United States of America, the CRTC in Canada, or a newspaper that refuses to run commentary the publisher disagrees with, or a lecture hall that refuses to rent itself out to a particular speaker, or an individual refusing to finance that lecture.

Data havens and decentralized peer-to-peer file sharing systems such as Freenet can be used to prevent censorship. A recent phenomenon for avoiding censorship and speaking directly to members of society is culture jamming, where individuals or non-conforming groups use large-scale corporate techniques to attack implicit domination and censorship through trivial or deliberately irrelevant messages. More traditionally, mass protests are a method for resisting unwanted impositions.

Interestingly, the censorship of swear-words in the United States seems not always to extend to non-American pronunciations. Instead of shit, the Scots and Northern English variant shite may apparently be used, as may fook for fuck. (Note: this was witnessed on broadcast television in early 2004, before the FCC levied several highly-publicized fines.)

(arguing that the English teacher should get advice from school librarians in preparing to encounter three levels of censorship:

Cleans-up mistakes made in speeches by US President George W. Bush, it also contains little contradictory information of current administration policies, and has deleted any reference to controversial Corporate accounting scandal figure Ken Lay, among others.

In a different example of sanitization, the U.S. State Department website will display material only when it supports administration policies. For example the website contains in full, the UN Security Council resolutions, which support the administration in its views of Iraq, but will not show such UN resolutions against Israel or the US.