File:RÃ©volution des Jasmins 05.jpg
Tank in front of the Cathedral of Tunis, during the Jasmine Revolution, 22 Jan 2011

In Tunisia these protests are called the Sidi Bouzid Revolt, derived from Wikipedia:Sidi Bouzid, the city where the initial protests began. [3][4] The events have been dubbed in the media as the Jasmine Revolution[5][6] in keeping with the geopolitical nomenclature of "Wikipedia:color revolutions", although the comparison is disputed, notably by many Tunisians themselves.[6][6][7][8]

Similar protests took place in many Arab countries[9] from Wikipedia:Morocco to Wikipedia:Iraq, as well as in other states, ranging from Wikipedia:Gabon to Wikipedia:Albania, Wikipedia:Iran and Kazakhstan (WP), to China (WP). China has censored most media coverage of the Arab worldâ€™s popular revolt of the last few weeks[10] leading to difficulty in organizing Jasmine protests in China.[11]

Police thwarted a rally by thousands of pro-democracy supporters, breaking up the crowd into isolated groups to keep them from marching. Algerian opposition leader Tahar Besbes was badly injured during a pro-democracy rally when riot police clashed with protesters. [2]

Jasmine revolution in China (WP) refers to the democracy movements in the Middle East and Mainland China (WP), influenced by Wikipedia:Tunisia Effect in 2011.

In late 2010 and early 2011, an unprecedented series of protests swept across Wikipedia:Northern Africa and the Wikipedia:Arabian Peninsula. Protests broke out in Tunisia, leading to the Wikipedia:2010â€“2011 Tunisian revolution, and the eventual peaceful overthrow of the Tunisian govenmnent and the head of the country Wikipedia:Zine El Abidine Ben Ali. This was followed shortly by the Wikipedia:Egyptian Revolution of 2011 and the overthrow of Egyptian President Wikipedia:Hosni Mubarak, and numerous other massive protests throughout the Wikipedia:Mahgreb and beyond. This motivated many in China towards democracy (WP). Taiwan's opposition Democratic Progressive Party (DPP) Chairwoman Tsai Ing-wen said that the party supports the democratic movement in China[12].

The anonymous call for a "jasmine revolution" in China's major cities was made online, first on a website run by overseas dissidents, then on Twitter, which despite being blocked is still widely used by activists in China.[13]

China's official in charge of the state security apparatus warned of the need to find new ways to defuse unrest[14]. Although there were no reports of large demonstrations, the outsize government response highlighted Chinaâ€™s nervousness at a time of spreading unrest in the Middle East aimed at overthrowing authoritarian governments. [15].

Jittery Chinese authorities wary of any domestic dissent staged a show of force Sunday to squelch a mysterious online call for a "Jasmine Revolution," with only a handful of people joining protests apparently modeled on the pro-democracy demonstrations sweeping the Middle East.[16][17]

The spirit of protests and marches has gotten as far as Wisconsin, many wonder if a full-fledged movement is under way. China has already proved it is worried about it, as it is using its control of the Internet to monitor chatter. As such, the mere mention of a Jasmine Revolution has brought out a new crackdown, online and offline. [18] The authoritarian government, always on guard to squelch dissent, is taking the threat of protests seriously and moved to stamp out the spread of the message that first appeared on U.S.-based Chinese-language website Boxun.com. [19]

File:Voa beijing 230 20feb11.jpg
The largely silent crowd gathered in front of a Wikipedia:McDonalds restaurant near Wikipedia:Tiananmen Square in Beijing (WP)

Internet calls for China to stage its own Egypt-style revolution have led to activists being arrested and a tense stand-off in the middle of Beijing.[20] Several top Chinese rights activists have disappeared into police custody as a web campaign urged angry citizens to mark the Middle East's "Jasmine Revolution" with protests.[21] Up to 15 leading Chinese rights lawyers and activists have disappeared on 19th February 2011 amid a nationwide police mobilisation, according to activists, while the government appeared to censor Internet postings calling for the demonstrations.

Searches for "jasmine" were blocked on China's largest Twitter-like microblog, and status updates with the word on popular Chinese social networking site Renren.com were met with an error message and a warning to refrain from postings with "political, sensitive ... or other inappropriate content."[23]

More than 20 mainland cities, including Tianjin , Chengdu and Guangzhou, stepped up security measures, with state security, police and armed forces ordered to stand by in case of emergency[24]. China Mobile, China Unicom has blocked the word "Jasmine".[25] Jasmine Revolution coming to the call of President Hu Jintao delivered a speech on 19th febeurary 2011 to senior management[26] fearing the spread of Jasmine revolution [27].

Though there are many similarities between the complaints voiced by Middle East citizens and the everyday troubles of Chinese, Beijing's tight grip on the country's media, Internet and other communication forums poses difficulties for anyone trying to organize mass demonstrations.[28] Extensive Internet filtering and monitoring meant that most Chinese were unlikely to know about the call to protest.

The online protest appeal is likely to compound the apparent concern among Communist Party leaders that the recent uprisings against authoritarian governments in the Middle East and North Africa could inspire similar unrest in China. [29] The lackluster popular response, however, demonstrates how much harder it would be to organize a sustained protest movement in a country with a well-funded and organized police force, and with the world's most sophisticated Internet censorship system.

Though the internet is censored in China to great extent, still it played a role in such protests. The rapid rise of the microblog in China over the past year has managed to shine a spotlight on many local incidents of unrest that in the past would have remained hidden. [30]. Online activists have compared the act of â€˜followingâ€™ a certain person or event on a microblog with the behaviour of onlookers who quickly form a crowd when a conflict happens in the street. And while for now most Chinese citizens are not ready to challenge the government openly, many are happy to be onlookers. In the face of the call for revolution, Beijing has stepped up its net censorship.

Weibo and other microblogs have quickly spread their presence in a country where Twitter and other social networking websites like Facebook are blocked. Their rapid growth, analysts say, is posing a new challenge to the authorities' hold on information â€” microblogs are providing millions of Internet users in China a platform to rapidly disseminate information on a never-before-seen scale on such events.[31]

Wikipedia:China's Jasmine revolution[32] has also brought the Chinese government into action. Chinese security officials questioned or detained[33] scores of activists and warned others against staging protests after an online call was made for demonstrations in 13 cities.[34] Protesters are calling for weekly events. [35]

Wikipedia:PRC Government officials arrested activists, added to the normal police presence, disabled some cell phone Wikipedia:text messaging services and deleted Internet postings about protests planned for 14:00 on 20 February in Beijing (WP), Wikipedia:Shanghai and 11 other cities.[36] On the day of the protests, the police turned out en masse to all of the potential protest locations.[37] Small crowds, including quite a few curious onlookers, gathered at the planned site in Wikipedia:Beijing and Wikipedia:Shanghai but did not chant slogans or hold signs.[38][39][40][41]

China also blocked coverage of the protests in the Arab world that continued after Mubarak's fall.[42]

President Wikipedia:Hu Jintao responded by calling top leaders into a "study session" to root out and tackle social issues before they "become threats to stability".[37] In a speech at the Central Party School, Hu called out for tighter restrictions to the internet.[43] On February 18, an architect of the country's Internet monitoring software told a state newspaper that the program, already regarded as among the most stringent in the world, should be strengthened.[44]

Political activists there have supported Wikipedia:China's Jasmine revolution for the democracy movements in the Middle East and Mainland China.[45]

It must be noted that the calls for the Jasmine Revolution originated from US based Chinese news sites like Boxun. The appeals for protests mostly fell flat with few silent protesters in the first protest and no protesters showing up in the second protest at Beijing and only a few supposedly protesters in Shanghai (most of the people at the protest sites were onlookers waiting to see what will happen). US Ambassador, Jon Huntsman, was identified by a Chinese onlooker at the Beijing protest venue, and when asked if he was the American Ambassador, he said 'yes'. The Chinese man then asked the US Ambassador if he wanted to see China in chaos, and the US Ambassador replied in Mandarin saying that was not the case. The Chinese man turned to the crowd and yelled to them about the presence of the the US Ambassador. At this point, Ambassador Huntsman left the scene abruptly with his entourage. Given the fact that the underlying problems in China are very different from the Arab World, the possibility of protests mimicking the Arab World is very low.

Supporters of the Green Movement gathered in scattered groups for the second time within a week to denounce the death of Saane Zhaleh, 26, and Mohammadi Mokhtari, 22, who were killed in Tehran on Monday. An opposition website affiliated to Mehdi Karroubi, a former presidential candidate, said that one person had been killed in Haft-e-Tir square in central Tehran when security forces opened fire at protesters. Dozens were arrested.

The Jasime Revolution also erupted in the country of Libya where enraged dissidents and the government are currently embroiled in titanic violence which has led to the freezing of the assets of Libyaâ€™s leaders including Qaddafi and the withdrawal of oil companies from the country. Angry Demonstrators Call for Libya's Gadaffi to Step Down.[46] 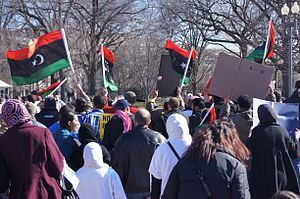 Libya's security forces may yet manage to put down the demonstrations, as they did with a smaller upsurge in 2006, although that is looking increasingly unlikely as the violence spreads and escalates. Eyewitnesses speak of how the Libyan people appear to have lost their fear - and this is a regime more brutal and absolute than the one that was toppled in Egypt earlier this month.[47][48]

Thousands took to the streets of Rabat, Casablanca, Tangier and Marrakech in peaceful protests demanding a new constitution, a change in government and an end to corruption. During a march on Hassan II Avenue in the capital, Rabat, demonstrators demanded a new constitution to bring more democracy to the country. They shouted slogans calling for economic opportunity, education reform, better health services, and help in coping with the rising cost of living.

The Associated Press estimated the turnout in Rabat at 4,000. Organizers put the crowd outside Parliament at 20,000.[49] The people were calling for a reduction in King Mohammed VIâ€™s powers, better health services and reduced living costs.[50][51]

Oman protesters called for democracy, about 300 people protested and demanded political reforms and better pay in a peaceful way. [52]

File:RÃ©volution des Jasmains 01.jpg
"RCD, Move away": Graffiti on the Square in Tunis, during the Jasmine Revolution, 7th of November 2010

The leader of Yemen's secessionist Southern Movement, Hasan Baoum, was arrested by an "armed military group" in an Aden hospital, according to his son, and shots were fired at a demonstration in the capital Sana'a, as unrest continued for a ninth consecutive day.

The use of communication technologies, and the Internet in particular, has been widely credited as contributor to the mobilisation of protests.[53] A blog associated with Wikipedia:Wired described the intricate efforts of the Tunisian authorities to control such online media as[54] Wikipedia:Twitter and Facebook (WP). Other regional regimes were also on higher alert to contain spillover effects that may ensue.