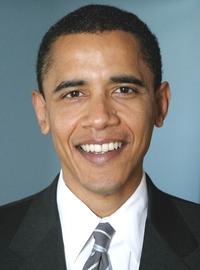 Barack Hussein Obama II (born August 4, 1961) is the 44th president of the United States. He took office on January 20, 2009. Obama is a member of the Democratic Party and won the United States presidential election of November 4, 2008.

Barack Obama was born on August 4, 1961[1][2][3] in Honolulu,[4] Hawaii,[1] to Barack Obama, Sr and Ann Dunham. His father eventually returned to Kenya, and Obama grew up with his mother in Hawaii, and for a few years in Indonesia. Later, he moved to New York,[2] where he earned a bachelor's degree in political science with specialization in international relations from Columbia University[5] in 1983.[5][6] He earned a law degree from Harvard in 1991[2] and worked as a lawyer in Chicago. Obama served in the Illinois state senate from 1996 to 2004 and was elected to the US Senate in 2004.[1] On February 10, 2007 Obama announced his candidacy for President of the United States in front of the Old State Capitol building in Springfield, Illinois.[7][8] On November 4, 2008, Obama was elected as the president of the United States.[9]

Obama voted for many laws on gun ban before his campaign for presidential election. After being elected as the president he said, "I believe in common-sense gun safety laws, and I believe in the second amendment. Lawful gun owners have nothing to fear. I said that throughout the campaign. I haven't indicated anything different during the transition. I think people can take me at my word." According to Andrew Arulanandam, spokesman of the National Rifle Association, it was not Obama's words but his legislative track record which made gun-buyers believe he will impose strict gun controls. Arulanandam said, "Prior to his campaign for president, his record as a state legislator and as a U.S. Senator shows he voted for the most stringent forms of gun control, the most Draconian legislation, gun bans, ammunition bans and even an increase in federal excise taxes up to 500 percent for every gun and firearm sold." In 1996 while answering to a question by an Illinois group whether he supports handgun ban, Obama said "yes", but he later said that answer was filled out by a staffer and he was against a ban.[10]

On Memorial Day[11] in 2008 Obama claimed, "I had an uncle who was one of the â€” who was part of the first American troops to go into Auschwitz and liberate the concentration camps. And the story in our family was that when he came home, he just went up into the attic and he didn't leave the house for six months". The Red Army of the Soviet Union liberated Auschwitz in January, 1945 rather than the US military. The Obama campaign said, later, he had confused Auschwitz with another concentration camp,[11] Buchenwald (which was liberated by U.S. troops in April of 1945),[12] but not before a controversy in the blogosphere was ignited.[12]

In his memoir Dreams From My Father, Obama claimed he read a Life magazine article[13] about an African-American man[14] who made an attempt to whiten his skin through some sort of chemical process. The consequence was a disaster[13] and the man was physically and mentally scarred. But Life magazine's own historians said the magazine never published such an article.[14]

According to the Chicago Sun-Times, during his 12 years in politics, Obama had received nearly three times more campaign cash from indicted[15] slumlord[16] Tony Rezko and his associates than he has publicly acknowledged.[15] Rezko has been a political patron to Obama and they have been friends for 17 years.[17]

In 2006, when residents of Illinois were angry with the electricity generating and distributing company Exelon, the largest nuclear power plant operator in the United States, as the company did not reveal a leak at one of their nuclear plants, Obama at first introduced a bill which made it compulsory for nuclear facilities to notify state and federal agencies of leaks. It seemed Obama was willing to change the reporting protocol regarding nuclear safety. But Obama's office later rewrote the new bill to make it favorable for Exelon and the nuclear industry, and did not do anything more because the executives of the company including its Chairman John W. Rowe raised money for Obama during his days in the Illinois State Legislature. Eventually the bill died in the Senate.[18]