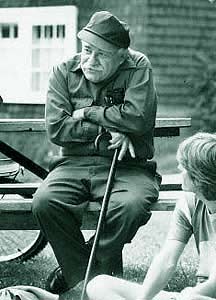 Murray Bookchin (born January 14, 1921 - died July 30, 2006) was an Ameican anarchist/municipalist speaker and writer, and founder of the "Social Ecology" school of anarchist and environmental thought. Throughout most of his life he described himself as an anarchist. However, he renounced the label in the 1990s in favor of his libertarian socialistÂ vision of communalismÂ or libertarian municipalism.

He was born in New York City to the Russian Jewish immigrants[7] Nathan Bookchin and Rose (Kaluskaya) Bookchin and grew up as a self-described "red-diaper baby", imbued with Marxist ideology from his youth. He worked in factories and became an organizer for the Congress of Industrial Organizations. In adolescence he gravitated towards Trotskyism, then gradually became disillusioned with the coercion he saw as inherent in conventional Marxism-Leninism. In some circles he became known for his ability to deliver devastating criticisms of Marxist ideology using conventional Marxist language. In the 1960s he was a member of the Libertarian League. Through the 1950s and 1960s, Bookchin worked in a number of working class situations â€” including a stint as a railroad stevedore. He began teaching in the late 1960s at the Free University, a counter-cultural 1960s-era Manhattan-based institution. This led to a tenured position at Ramapo State College in Mahwah, NJ. At the same time, he co-founded, in 1971, the Institute for Social Ecology at Goddard College in Vermont.

Bookchin remained a radical anti-capitalist and vocal advocate of the decentralisation of society. He was influential on the anti-globalization movement. His idea of Libertarian Municipalism has had an influence on the Green Movement. In his essay Social Anarchism Or Lifestyle Anarchism: An Unbridgeable Chasm, Bookchin directed criticism at currents of anarchism which he perceived to be promoting anti-rationalism or excessive individualism, e.g. Hakim Bey, John Zerzan and L. Susan Brown.

Bookchin is the author of many works, including Post Scarcity Anarchism and The Ecology of Freedom.