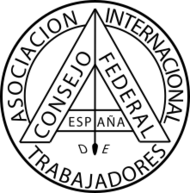 Logo first used by the Federal Council of Spain of the International Workingmen's Association.

In December of 1868, the International Alliance of Socialist Democracy, whose most well-known spokesperson was Mikhail Bakunin, applied to join the IWMA. The IWMA rejected this on the grounds that the Alliance was an international organization, and the IWMA was made up of national groups. The groups within the alliance then joined the IWMA as their separate national groups.

One of the major historical events to occur during the existence of the First International was the formation of the Paris Commune in 1871.

On September 15th, anarchists from different countries met in Saint-Imier. The anarchists continued having congresses in this group until 1877.