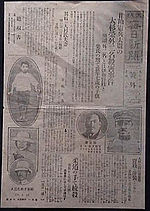 A clip from the Mainichi Shimbun, on the death of Noe Ito and Sakae Osugi.

The Amakasu Incident occurred on September 16, 1923, in the chaos immediately following the Great KantÅ earthquake. Fearing that anarchists would take advantage of the disaster to overthrow the government, a squad of military police led by Lieutenant Masahiko Amakasu arrested Sakae Osugi, Noe Ito, and Sakae's six year old nephew. They were later beaten to death and their bodies thrown into a well.

The killing of such high profile anarchists, along with a young child, became known as the Amakasu Incident, and sparked surprise and anger throughout Japan.