Not to be confused with Stenography, a type of shorthand Template:Hidden messages Steganography is the art and science of writing hidden messages in such a way that no one apart from the sender and intended recipient even realizes there is a hidden message. By contrast, cryptography obscures the meaning of a message, but it does not conceal the fact that there is a message. Today, the term steganography includes the concealment of digital information within computer files. For example, the sender might start with an ordinary-looking image file, then adjust the color of every 100th pixel to correspond to a letter in the alphabetâ€”a change so subtle that someone who isn't actively looking for it is unlikely to notice it.

The word steganography is of Greek origin and means "covered, or hidden writing". Its ancient origins can be traced back to 440 BC. Herodotus mentions two examples of steganography in The Histories of Herodotus.[1] Demaratus sent a warning about a forthcoming attack to Greece by writing it on a wooden panel and covering it in wax. Wax tablets were in common use then as re-usable writing surfaces, sometimes used for shorthand. Another ancient example is that of Histiaeus, who shaved the head of his most trusted slave and tattooed a message on it. After his hair had grown the message was hidden. The purpose was to instigate a revolt against the Persians. Later, Johannes Trithemius published the book Steganographia, a treatise on cryptography and steganography disguised as a grimoire.

Generally, a steganographic message will appear to be something else: a picture, an article, a shopping list, or some other message. This apparent message is the covertext. For instance, a message may be hidden by using invisible ink between the visible lines of innocuous documents.

The advantage of steganography over cryptography alone is that messages do not attract attention to themselves, to messengers, or to recipients. An unhidden coded message, no matter how unbreakable it is, will arouse suspicion and may in itself be incriminating, as in countries where encryption is illegal.[2] Often, steganography and cryptography are used together to ensure security of the covert message.

Steganography used in electronic communication include steganographic coding inside of a transport layer, such as a file, or a protocol, such as UDP. Usually, files meant for internet means are put into media types that are lossless, such as FLAC, WAV, PNG etc.

A steganographic message (the plaintext) is often first encrypted by some traditional means, producing a ciphertext. Then, a covertext is modified in some way to contain the ciphertext, resulting in stegotext. For example, the letter size, spacing, typeface, or other characteristics of a covertext can be manipulated to carry the hidden message; only the recipient (who must know the technique used) can recover the message and then decrypt it. Francis Bacon developed Bacon's cipher as such a technique.

Template:Expert-subject Modern steganography entered the world in 1985 with the advent of the Personal Computer applied to classical steganography problems. [3] Development following that was slow, but has since taken off, based upon the number of 'stego' programs available.

Steganography has been widely used in historical times, especially before cryptographic systems were developed. Examples of historical usage include:

In general, terminology analogous to (and consistent with) more conventional radio and communications technology is used; however, a brief description of some terms which show up in software specifically, and are easily confused, is appropriate. These are most relevant to digital steganographic systems.

The payload is the data it is desirable to transport (and, therefore, to hide). The carrier is the signal, stream, or data file into which the payload is hidden; contrast "channel" (typically used to refer to the type of input, such as "a JPEG image"). The resulting signal, stream, or data file which has the payload encoded into it is sometimes referred to as the package, stego file, or covert message. The percentage of bytes, samples, or other signal elements which are modified to encode the payload is referred to as the encoding density and is typically expressed as a floating-point number between 0 and 1.

In a set of files, those files considered likely to contain a payload are called suspects. If the suspect was identified through some type of statistical analysis, it may be referred to as a candidate.

Detection of physical steganography requires careful physical examination, including the use of magnification, developer chemicals and ultraviolet light. It is a time-consuming process with obvious resource implications, even in countries where large numbers of people are employed to spy on their fellow nationals. However, it is feasible to screen mail of certain suspected individuals or institutions, such as prisons or prisoner-of-war (POW) camps. During World War II, a technology used to ease monitoring of POW mail was specially treated paper that would reveal invisible ink. An article in the June 24, 1948 issue of Paper Trade Journal by the Technical Director of the United States Government Printing Office, Morris S. Kantrowitz, describes in general terms the development of this paper, three prototypes of which were named Sensicoat, Anilith, and Coatalith paper. These were for the manufacture of post cards and stationery to be given to German prisoners of war in the US and Canada. If POWs tried to write a hidden message the special paper would render it visible. At least two US patents were granted related to this technology, one to Mr. Kantrowitz, No. 2,515,232, "Water-Detecting paper and Water-Detecting Coating Composition Therefor", patented July 18, 1950, and an earlier one, "Moisture-Sensitive Paper and the Manufacture Thereof", No. 2,445,586, patented July 20, 1948. A similar strategy is to issue prisoners with writing paper ruled with a water-soluble ink that "runs" when in contact with a water-based invisible ink.

In computing, detection of steganographically encoded packages is called steganalysis. The simplest method to detect modified files, however, is to compare them to known originals. For example, to detect information being moved through the graphics on a website, an analyst can maintain known-clean copies of these materials and compare them against the current contents of the site. The differences, assuming the carrier is the same, will compose the payload. In general, using extremely high compression rate makes steganography difficult, but not impossible. While compression errors provide a hiding place for data, high compression reduces the amount of data available to hide the payload in, raising the encoding density and facilitating easier detection (in the extreme case, even by casual observation).

Steganalysis can have a two-sided approach that involves detecting both artifacts and signatures of known steganography applications. All files on a suspect filesystem can be hashed using a hash function and then compared to a hash table of known steganography applications to show that a particular steganography application is, or was, present on the system at some point in time. The second step in the steganalysis process is to search all files on a suspect filesystem for signatures (uniquely identifiable byte patterns) that act as identifiers that are embedded as a result of hiding the information. A similar approach can be used to scan files over network links in real-time.

There will always be a unnegligible probability of being detected even if your hidden stream behaves like a â€œnatural containerâ€ (unpredictable side-effects, you're caught Flagrante delicto, ...). Resisting also these unpredictable attacks is possible, even when you will be enforced (by legal or physical coercion) to provide a valid password.[5][6] Deniable steganography (a decoy based technique) allows to convincingly deny the fact that sensible data is being hidden. You only have to provide some expendable decoy data, that you would plausibly want to keep confidential, and reveal it to the attacker, claiming that this is all there is.

Steganography is used by some modern printers, including HP and Xerox brand color laser printers. Tiny yellow dots are added to each page. The dots are barely visible and contain encoded printer serial numbers, as well as date and time stamps. 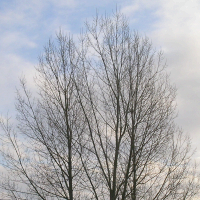 Image of a tree.
By removing all but the last 2 bits of each color component, an almost completely black image results. Making the resulting image 85 times brighter results in the image below. 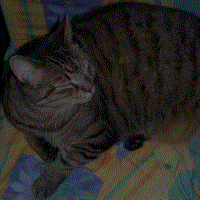 Image extracted from above image.

The larger the cover message is (in data content termsâ€”number of bits) relative to the hidden message, the easier it is to hide the latter.

For this reason, digital pictures (which contain large amounts of data) are used to hide messages on the Internet and on other communication media. It is not clear how commonly this is actually done. For example: a 24-bit bitmap will have 8 bits representing each of the three color values (red, green, and blue) at each pixel. If we consider just the blue there will be 28 different values of blue. The difference between 11111111 and 11111110 in the value for blue intensity is likely to be undetectable by the human eye. Therefore, the least significant bit can be used (more or less undetectably) for something else other than color information. If we do it with the green and the red as well we can get one letter of ASCII text for every three pixels.

Stated somewhat more formally, the objective for making steganographic encoding difficult to detect is to ensure that the changes to the carrier (the original signal) due to the injection of the payload (the signal to covertly embed) are visually (and ideally, statistically) negligible; that is to say, the changes are indistinguishable from the noise floor of the carrier.

From an information theoretical point of view, this means that the channel must have more capacity than the 'surface' signal requires, that is, there must be redundancy. For a digital image, this may be noise from the imaging element; for digital audio, it may be noise from recording techniques or amplification equipment. In general, electronics that digitize an analog signal suffer from several noise sources such as thermal noise, flicker noise, and shot noise. This noise provides enough variation in the captured digital information that it can be exploited as a noise cover for hidden data. In addition, lossy compression schemes (such as JPEG) always introduce some error into the decompressed data; it is possible to exploit this for steganographic use as well.

Steganography can be used for digital watermarking, where a message (being simply an identifier) is hidden in an image so that its source can be tracked or verified.

Template:Inappropriate tone When one considers that messages could be encrypted steganographically in e-mail messages, particularly e-mail spam, the notion of junk e-mail takes on a whole new light. Coupled with the "chaffing and winnowing" technique, a sender could get messages out and cover their tracks all at once.

A citation from the USA Today article: "Lately, al-Qaeda operatives have been sending hundreds of encrypted messages that have been hidden in files on digital photographs on the auction site eBay.com". These rumors were cited many timesâ€”without ever showing any actual proofâ€”by other media worldwide, especially after the terrorist attack of 9/11.

For example, the Italian newspaper Corriere della Sera reported that an Al Qaeda cell which had been captured at the Via Quaranta mosque in Milan had pornographic images on their computers, and that these images had been used to hide secret messages (although no other Italian paper ever covered the story).

The USA Today articles were written by veteran foreign correspondent Jack Kelley, who in 2004 was fired after allegations emerged that he had fabricated stories and invented sources.

In October 2001, the New York Times published an article claiming that al-Qaeda had used steganographic techniques to encode messages into images, and then transported these via e-mail and possibly via USENET to prepare and execute the September 11, 2001 Terrorist Attack.

The Federal Plan for Cyber Security and Information Assurance Research and Development[7], published in April 2006 makes the following statements:

Moreover, a captured terrorist training manual, the "Technical Mujahid, a Training Manual for Jihadis" contains a section entitled "Covert Communications and Hiding Secrets Inside Images." A brief summary is provided by the Jamestown Foundation [8].