From Anarchopedia
(Redirected from squat)
Jump to: navigation, search
File:Chien Rouge.jpg
The Chien Rouge in Lausanne, a squat held in the old hospital.

Squatting is the act of occupying an abandoned or unoccupied space or building that the squatter does not own, rent or otherwise have permission to use. Squatters often claim rights over the spaces they have squatted by virtue of occupation, rather than ownership; in this sense, squatting is similar to (and potentially a necessary condition of) adverse possession, by which a possessor of real property without title may eventually gain legal title to the real property.

Squatting has a long history, as old as or older than the idea of property itself. To squat in many countries is in itself a crime; in others it is only seen as a civil conflict between the owner and the occupants. Property law and the state have traditionally favored the property owner. However, in many cases where squatters had de facto ownership, laws have been changed to legitimize their status. It is said that the United States Homestead Act is an example of such legislation. Additionally, US states which have a shortage of housing tend to tolerate squatters in property awaiting redevelopment until the developer is ready to begin work; however, at that point the laws tend to be enforced.

Urban migration has driven global estimates of the number of squatters over one billion people, with 200,000 added every day. In many of the world's poorer countries there are extensive slums or shanty towns, such as the favelas of Brazil, typically built on the edges of major cities and consisting almost entirely of self-constructed housing built on terrain seized and occupied illegally. Also, common in many of these same countries are rural squatter movements, such as, again taking a Brazilian example, the Landless Workers' Movement.

Besides being residences, a few squats are hosts to give-away shops, pirate radio stations and even cafÃ©s.

In Australian history, the term refers to early farmers who occupied huge tracts of largely undeveloped land on which they ran large numbers of sheep and cattle. Initially often having no legal rights to the land, they gained its usage by being the first (and often the only) Europeans in the area.

From 1824 there were acts and regulations to limit squatting. The limits of location, also known as the Nineteen Counties, were defined from 1826; beyond these limits land could not be taken up although squatters were farming there. From 1833 Commissioners of Crown Lands were appointed under the Encroachment Act to manage squatting. From 1836 legislation was passed to legalise squatting with grazing rights available for ten pounds per year. The 1847 Orders in Council divided land into settled, intermediate and unsettled areas, with pastoral leases of one, eight and 14 years for each category respectively. In Victoria, the 1860 Land Act allowed free selection of Crown land including that occupied by pastoral leases. Equivalent New South Wales legislation, the Crown Lands Allienation Act and Crown Lands Occupation Act was passed the following year. These acts ended the squatting era, but did not succeed in their intent to move Australia from a pastoral to agrarian economy.[1]

It is known that many squatters fought battles with advanced European weapons against the local Indigenous Australian communities in the areas they occupied, though such battles were rarely investigated and modern historians dispute the number of Indigenous people killed in these skirmishes. Squatters were only occasionally prosecuted for killing indigenous people. The first trial of white men accused of murdering Indigenous people was the trial following the Myall Creek massacre, in 1838, fifty years after the arrival of British colonists.

Whilst life was initially tough for the squatters, with their huge landholdings many of them became very wealthy and were often described as the "squattocracy". The descendants of these squatters often still own significant tracts of land in rural Australia, though most of the larger holdings have been broken up, or, in more isolated areas, have been sold to corporate interests.

Their iron grip on Australia's agricultural land was challenged in the 1860s with the passing of Selection Acts that allowed ex-miners from the 1850s gold rush to claim areas of farmland at no cost. Whilst squatters tried tactics legal and illegal to discourage "the selectors", (for instance, taking out selections of their own which covered vital land such as watercourses), eventually closer settlement took place and smaller farms (though still huge by European and even US standards) became the norm in the more fertile parts of Australia.

The power of the squatters, including their affinity with the police, is alluded to in "Waltzing Matilda", Australia's archetypal folksong.

Of late, the term's meaning in Australia has come to be the same as that of the British usage.

Squatting has been widespread in South Africa for years. Squatters tend to live in large shantytowns [2] that are usually called informal settlements or squatter camps on the outskirts of the larger cities, often near townships. Many buildings, particularly in the inner-city of Johannesburg have also been occupied by squatters. Property owners or government authorities can usually evict squatters after following the legal correct procedures.

Squatting in the United Kingdom[edit]

In England and Wales, squatting usually refers to occupying an empty house in a city. The owner of the house must go through various legal proceedings before evicting squatters. The owner must prove that they have a right to live in the property and that the squatter does not, while the squatter has the opportunity to claim there isn't sufficient proof or that the proper notice hasn't been given.

The legal process of eviction can take a month or so, giving the squatter time to find somewhere else to live. This is what happens when the property is owned by the council or a housing association. However, many squatters are familiar with the experience of having the land lord turn up accompanied by thugs.

In order to legally occupy a premises you need to have exclusive access to that property, i.e., change the locks and keep the place secure like you would in a normal home. This is covered in a legal document known as Section 6, a copy of which is often displayed on the front door.

Some properties are still occupied by squatters who have resisted eviction for 20 years. Squatters have a right to claim ownership of a dwelling after 12 years of having lived there if no one else claims it. St. Agnes Place in London had been squatted in for 30 years until 29th November 2005, when Lambeth Council evicted the entire street.

To show that the occupier of the squatted building is in fact in physical possession of the property, squatters often put up a section 6 notice or even multiple copies on different sides of the building. Doing so shows that there are people living there and they have a legal right to be there. This also makes clear that anyone - even the technical owner of the property - who tries to enter the building without permission is committing an offence.

Squatting in the United States[edit]

In the United States, squatting laws vary from state to state and city to city. For the most part it is rarely tolerated to any degree for long, particularly in cities. Laws biased towards a contract ownership interpretation of property make it easy for deed holders to evict squatters under loitering or trespassing laws. The situation is more complicated for legal residents who fail to make rent or mortgage payments, but the result is largely the same. Most squatting in the U.S. is dependent on law enforcement and the person legally considered to be owner of the property being unaware of the occupants. Often the most important factors in the longevity of squats in the US are apathy of the owner and the likeliness of neighbors to call police. The most common tactic to accomplish this is not to be seen going in and out, which doesn't always make American squats as sustainable as those in many other countries.

Squats used for living in can be divided into two types (although they are not absolutes): So-called "back window squats" (the most common type, in which occupants sneak in and out of the building with the intent of hiding the fact that they live there), and "front door squats" (where the occupants make little or no effort to conceal their comings and goings). Many squats may start out as one or the other and then change over time. Frequently squatters will move in and then later assess how open they can be about their activities before they approach the neighbors; others will not move into a place until they have first met and discussed the idea with the neighbors. The difference between the two types can be signs of vast differences in philosophies of squatting and its purpose, how long the occupants plan to be around, and on the atmosphere of the neighborhood, among many other factors.

This was not always the case, particularly in the era of Westward expansion, wherein the Federal government specifically recognized the rights of squatters. For example, see the 1841 Pre-emption Act.

Although acting as a home is their primary use, there have been nearly as many different things happening in squats as there has been in rented/owned property. Squat cafÃ©s, drinking establishments, libraries, "swap shops"/"share stores", gyms and even rooms for BDSM activity have all been created, with many squats also holding parties and concerts. Squatted social centres are often a combination of many things that happen in one space with the main aim of creating a space for people to meet in a non-commercial setting, whether it be for a party, political workshop, to see a film, have a drink or have breakfast. There are many squatted social centres around the world but mainly in countries where squatting is legal. 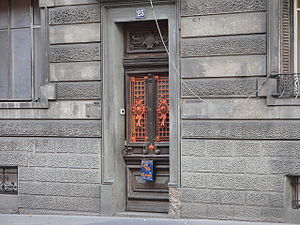 The Chien Rouge in Lausanne, a squat held in the old hospital. 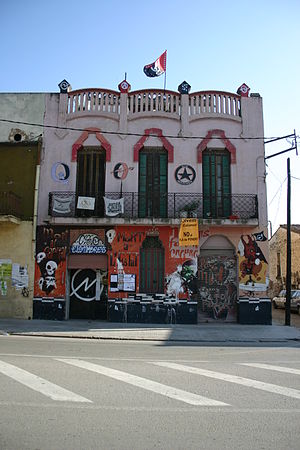