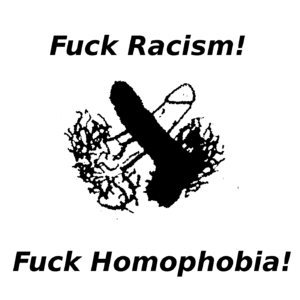 Anti-racism refers to beliefs, actions, movements, and policies adopted or developed to oppose racism and racialism. In general, anti-racism is intended to promote an egalitarian society in which people do not face discrimination on the basis of their race, however defined. By its nature, anti-racism tends to promote the view that racism in a particular society is both pernicious and socially pervasive, and that particular changes in political, economic, and/or social life are required to eliminate it.

In antiquity, many socities did not discriminate on the basis of race. Scholars believe that ancient Egypt, though hardly democratic, did not base social status on race. Similarly, Ancient Rome did not make strong social distinctions between blacks and whites.

North American Native American nations had more of a direct influence on anti-racism. Many Indian nations were very egalitarian in comparison to European nation-states. Moreover, though Indians often saw their culture as superior, they did not tend to make racial distinctions in the same way as Europeans did. Both whites and blacks could -- and did -- join Indian nations as equals.

The Indian example was a practical threat to European white supremacy. Some whites preferred living as Indians, while black slaves could become free by escaping to Indian territory. Several Indian nations -- most notably the Seminole -- were mixed race, with both Native Americans and blacks as members. The U.S. war against the Seminoles was motivated in part by a desire to close an escape route for Southern slaves.

Besides the practical threat, however, Native American societies presented an ideological danger to racism. Many scholars believe that these societies helped to inspire enlightenment doctrines of equality and freedom. In any case, it is certainly true that the seeds of anti-racism were implicit in the statment "all men are created equal". Black westerners, like Olaudah Equiano, and even some whites, like Thomas Jefferson, did point this out, though the blacks were often not in a position to do much about it, while whites, like Jefferson, were often unwilling.

Eventually, however, that changed. The first great successes of anti-racism were won by the abolitionist movement, both in England and the United States. Though many abolitionists did not regard blacks as equal, they did in general believe in freedom and often even equality of treatment for all people. A few, like John Brown, went further. Brown was willing to die on behalf of, as he said, "millions in this slave country whose rights are disregarded by wicked, cruel, and unjust enactments...." Many black abolitionists, like Frederick Douglass, explicitly argued for the humanity of blacks and for the equality of all people.

During the American Civil War, anti-racism in the North became much stronger and more generally disseminated. The success of black troops in the Union Army had a dramatic impact on Northern sentiment. After the war, Reconstruction government was often explicitly anti-racist, most notably in passing the Fourteenth Amendment and Fifteenth Amendment to the Constitution to guarantee the rights of blacks, but also in its general support for black rights and in its committment to equal treatment. As a result, many ex-slaves had access to education for the first time. Blacks were also allowed to vote, which meant that African-Americans were elected to Congress in numbers not seen before -- or since.

Due to prolonged racist resistance in the South, however, and a general collapse of idealism in the North, Reconstruction ended, and gave way to the nadir of American race relations. The period from about 1890 to 1920 saw the re-establishment of Jim Crow and a general abandonment of anti-racist ideology. Woodrow Wilson, a revisionist historian who regarded Reconstruction as a disaster, resegregated the federal government. The Ku Klux Klan grew to its greatest peak of popularity and strength. D.W. Griffith's "The Birth of a Nation" was a movie sensation. During this period, John Brown's anti-racist stand was so incomprehensible that he became regarded as insane.

The revival of anti-racism in the U.S.[edit]

Anti-racism showed signs of revival in the 1920s and 1930s. At that time, anthropologists such as Franz Boas, Ruth Benedict, Margaret Mead, and Ashley Montagu argued for the equality of humans across races and cultures. Other whites, too, began to speak out in favor of racial equality; Eleanor Roosevelt, for example, was a very visible advocate for minority rights during this period. Socialist organizations like the wobblies, which gained some popularity during the Great Depression were often explicitly anti-racist. Perhaps more importantly, beginning with the Harlem Renaissance and continuing into the 1960s, many famous African-American writers, including James Weldon Johnson, Langston Hughes, Richard Wright, and James Baldwin argued forcefully against racism.

Anti-racism won its most notable and lasting victories in America during the Civil Rights Movement. Jim Crow laws were repealed in the South and blacks finally re-won the right to vote in Southern states. Civil-rights leader Martin Luther King Jr.'s famous "I Have a Dream" speech is probably the best-known condensation of anti-racist ideology in the U.S., and possibly in the world.

Anti-racist ideology has been hugely influential. It has been a catalyst for feminism, anti-war, and anti-imperialist movements. Henry David Thoreau's opposition to the Mexican War, for example, was based in his fear that the U.S. was using the war as an excuse to expand slavery into new territories. Thoreau's response was chronicled in his famous essay "Civil Disobedience", which in turn helped ignite Ghandi's successful campaign against the British in India. Ghandi's example in turn inspired the American Civil Rights movement.

Indeed, as James Loewen notes in "Lies My Teacher Told Me","Throughout the world, from Africa to Northern Ireland, movements of oppressed people continue to use tactics and words borrowed from our abolitionist and civil rights movements." In East Germany, in revolutionary Iran, in Tiananmen Square, in South Africa, images, words, and tactics developed by anti-racism have been used regularly and repeatedly.

Many of these uses have been controversial. For example, Ho Chi Minh was an admirer of John Brown. The pro-life movement often draws connections between its goals and the goals of abolitionism. In Zimbabwe, Robert Mugabe has used anti-racist rhetoric to a land-distribution scheme which resulted in widespread starvation. Still, whether one supports or despises anti-racisms use in any particular context, its success, at least in one sense, has been overwhelming. Not so long ago, racism was the explicit ideology of the West. Today, on the other hand, it is eschewed -- at least in name -- by almost every prominent figure of note. Today, virtually no one -- not Strom Thurmond, not David Duke -- wants to be known as a white supremacist.

Despite anti-racism's successes, however, many people feel that racism is still a powerful force in Western societies. Proponents of the stronger forms of anti-racism point to ongoing differences in quality of life among different races and say that rooting out discriminatory attitudes and practices is a requirement of simple justice. Thus, they argue that racism still drives such phenomena as the drug war, the prison system, ongoing segregation of housing, racial profiling, police brutality, U.S. imperialism, and possibly the immigration reductionism movement. Anti-racists may advocate various responses to this problem, from constitutional changes (for instance, changes in drug laws or in school funding) to greater individual sensitivity. A few of the more controversial programs advocated by some anti-racists include reparations, affirmative action, diversity training, and the antifa movment.

Critics of contemporary anti-racism say that ethnicity amid some degree of ethnocentrism is legitimate and beneficial, that there are non-discriminatory explanations to most racial differences in social and economic position, and that the presumption that discrimination is pervasive, hidden and immensely destructive leads to intolerable bureaucratic interference in the daily lives of individuals, organizations, and communities. Overall, conservative and right-wing groups in general typically consider anti-racism to be fueled by a leftist coalition between white guilt and identity politics. However, as noted above, anti-anti-racist groups do not consider themselves racist. On the contrary, they often charge the left with reverse racism, and insist that the right is the true inheritor of anti-racism's egalitarian tradition.

In recent years the belief that race has no effect on intelligence or potential -- a basic tenet of anti-racist philosophy -- has been attacked by scholars such as Charles Murray, Michael Levin, and J. Philippe Rushton and defended by other scholars such as Stephen Jay Gould and Richard Lewontin.