One reason for miniaturizing satellites is to reduce the cost: heavier satellites require larger rockets of greater cost to finance; smaller and lighter satellites require smaller and cheaper launch vehicles and can sometimes be launched in multiples. They can also be launched 'piggyback', using excess capacity on larger launch vehicles. Miniaturized satellites allow for cheaper designs as well as ease of mass production, although few satellites of any size other than 'communications constellations' where dozens of satellites are used to cover the globe, have been mass produced in practice.

Besides the cost issue, the main rationale for the use of miniaturized satellites is the opportunity to enable missions that a larger satellite could not accomplish, such as:

Because they are much smaller than previous types of satellites, Microsatellites can be placed in orbits much closer to Earth. Because they are closer, the area from which they can receive signals and to which they can send them is much smaller, in the opposite way to a goalie protecting more of a soccer goal with the same reach, the further out from the goal he is, or the same way as a torch/flashlight shines a narrower beam the closer to a a reflective surface it comes. Despite the fact that this requires many microsatellites to be launched at the same time, to cover the same area, it is still cheaper to launch and maintain the 'constellations' of satellites, as their formations are called, and they cover their assigned areas faster.

The Physics Behind Covering the Earth[edit]

Polar oriented, or Polar orbiting microsatellites pass approximately over the north and south poles along lines of longitude[2]. Imagine shining a flashlight on a globe at a simulated 1,000 km above the earth surface. The diameter of the beam on the earth will cover 4,819 km assuming a 10 degree slant angle[3]. If you were to draw a square within that footprint such that each corner of the square just touches the edge of the circle, each side of the square will have a length of 3,407 km[4]. With the 12 spaces (found between the six orbital planes) multiplied by 3,407 km, the coverage of the squares equals 40,884 km. The circumference of the earth at the equator is approximately 40,075 km[5]. As such, the squares will overlap each other at the equator providing complete coverage. As you move toward the poles, the circumference of the earthâ€™s east/west orientation decreases as the cosine of the latitude [6] resulting in more overlap. In addition, if we include the area between any side of the square and the edge of the circle, the overlap from one satellite footprint to another is greater. The overlap at the equator covers an area of approximately 1,480 km. The strength of the beam at the surface varies with the square of the satellite altitude according to the inverse-square law. 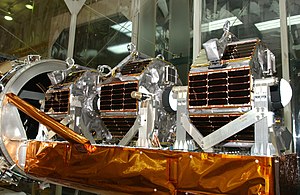 Microsatellite or "microsat" is usually applied to the name of an artificial satellite with a wet mass between 10 and 100 kg. However, this is not an official convention and sometimes microsats can refer to satellites larger than that. Sometimes designs or proposed designs of these types have microsatellites working together or in a formation. The generic term "small satellite" is also sometimes used.

The term "nanosatellite" or "nanosat" is usually applied to the name of an artificial satellite with a wet mass between 1 and 10 kg. Again designs and proposed designs of these types usually have multiple nanosatellites working together or in formation (sometimes the term "swarm" is applied). Some designs require a larger "mother" satellite for communication with ground controllers or for launching and docking with nanosatellites.

Picosatellite or "picosat" (not to be confused with the PICOSat series of microsatellites) is usually applied to the name of an artificial satellite with a wet mass between .1 and 1 kg. Again designs and proposed designs of these types usually have multiple picosatellites working together or in formation (sometimes the term "swarm" is applied). Some designs require a larger "mother" satellite for communication with ground controllers or for launching and docking with picosatellites. The CubeSat design, with 1 kg maximum mass, is an example of a large picosatellite (or minimum nanosat).

Larger satellites usually use monopropellants or bipropellant combustion rockets for propulsion and attitude control; these systems are complex and require a minimal amount of volume to surface area to dissipate heat. These systems are used on larger microsats, while other micro/nanosats have to use electric propulsion, compressed gas, vaporizable liquids such as butane or carbon dioxide or other innovative propulsion systems that are simple, cheap and scalable.

Microsats can use conventional radio systems in UHF, VHF, the S-band and X-band, although often miniaturized using more up-to-date technology as compared to larger satellites. Tiny satellites such as nanosats and small microsats may lack the power supply or mass for large conventional radio transponders, and various miniaturized or innovative communications systems have been proposed, such a laser receivers, antenna arrays and satellite to satellite communication networks. Few of these have been demonstrated in practice.

Electronics need to be rigorously tested and modified to be "space hardened" or resistant to the outer space environment (vacuum, microgravity, thermal extremes, and radiation exposure). Miniaturized satellites allow for the opportunity to test new hardware with reduced expense in testing. Furthermore, since the overall cost risk in the mission is much lower, more up-to-date but less space-proven technology can be incorporated into micro and nanosats than can be used in much larger, more expensive missions with less appetite for risk.

Manufacturers of microsatellites include SpaceDev and Surrey Satellite Technology Ltd.

Manufacturers of nanosatellites include GomSpace, ISIS and UTIAS-SFL.

SuitSat, a retired spacesuit fitted with some basic instrumentation and radio transmitting equipment and released into orbit in 2006, was an unconventional example of a low-cost microsatellite test platform.

The reference WP missed, because they only used Google News, therefore deciding to scrap the article: