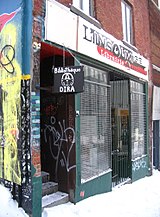 From the late 1970's on, Alternative bookshop moved to and rented space at this location. The non-profit association (known by the acronym "AEELI") that presently owns the Insoumise bookstore was formed in 1982, and bought the building a year later, thus ensuring that a bookstore could continue without paying high downtown rents.

From the 1990s on, the Alternative bookshop collective became the object of numerous criticisms for its management and its poor relations with certain groups and currents of anarchism in Montreal.[4][5] In 2003, an anarchist distributors' coalition formed, withdrew their publications from Alternative and encouraged people to book browse at the "Anarchist Kiosks" occasionally held at the CafÃ© Chaos, on nearby St-Denis street. The Coalition was involved in a bitter struggle to bring about changes or oust Alternative from the bookstore space.[6][7]

The bookstore's French name l'Insoumise means "The Insubordinate", a derogatory moniker given to Louise Michel by the powers that be; she was a French anarchist and participant in the Paris Commune.

The bookstore is self-managed by a bookstore committee (the comitÃ© libraire) mandated by the non-profit organisation.[8] It is open to individual anarchists or anarchist distribution projects, through their delegates. Since 2004, the great majority of Montreal's anarchist distributors, writers or publishing projects have become active members, or in the case of smaller projects, have left their material on consignment.

In the same building as the bookstore, there is a lending library and reading room, the DIRA, which stands for Documentations, Informations, RÃ©fÃ©rences et Archives.