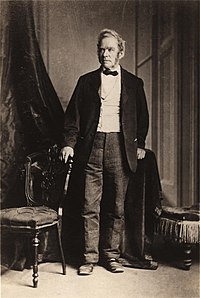 Josiah Warren (1798-1874) was an individualist anarchist, inventor, musician, and author in the United States. Biographer William Bailie regarded him as the first American anarchist, and the four-page weekly paper he edited during 1833, The Peaceful Revolutionist, was the first anarchist periodical published,[1] an enterprise for which he built his own printing press, cast his own type and made his own printing plates.[1]

Warren was born in Massachusetts in 1798. He showed an early talent for music, and was a member of the "Old Boston Brigade Band" at an early age. He married at age 20, and in 1821 moved to Cincinnati, Ohio. He invented a tallow-burning lamp in 1821, and manufactured his invention for a number of years in Cincinnati.[2]

In 1825, Warren became aware of the "social system" of Robert Owen, and began to talk with others in Cincinnati about founding a communist colony.[3] When this group failed to come to agreement about the form and goals of their proposed community, Warren decided to join Owen's community at New Harmony, Indiana. The Cincinnati colony was attempted without Warren's involvement, but failed.[4] Warren traveled by flat-boat from Cincinnati, arriving in New Harmony in early May, 1825. By 1827, he had returned to Cincinnati, convinced that the complete individualization of interests was necessary to cooperation. He considered Owen's experiment "communism," which he rejected in no uncertain terms. For Robert Owen and his sons, however, Warren developed a warm and lasting respect. One of his earliest writings, published in The March of Mind in 1828, attests to this, as do later writings.[5]

Warren, like Proudhon, chose the path of anarchy and individualism over authoritarian state socialism. Benjamin Tucker dedicated his collection of essays, Instead of a Book, to the memory of Warren, "my friend and masterâ€¦whose teachings were my first source of light". Tucker credits Warren with being "the first man to expound and formulate the doctrine now known as Anarchism."[7] John Stuart Mill said Warren's philosophy, "though being a superficial resemblance to some of the project of the Socialists, is diametrically opposed to them in principle, since it recognizes no authority whatever in Society, over the individual, except to enforce equal freedom of development for all individuals."[8] Warren's principle of the "sovereignty of the individual" was later taken up by Mill and Herbert Spencer.[9]

Warren's individualistic philosophy arose out of his rejection of Robert Owen's cooperative movement, of which he was an early participant, witnessing in person the failure of Owen's New Harmony commune. Of it, he wrote: "It seemed that the difference of opinion, tastes and purposes increased just in proportion to the demand for conformity [â€¦] It appeared that it was nature's own inherent law of diversity that had conquered us [â€¦] our 'united interests' were directly at war with the individualities of persons and circumstances and the instinct of self-preservation". According to Warren, there should be abolutely no community of property; all property should be individualized, and "those who advocated any type of communism with connected property, interests, and responsibilities were doomed to failure because of the individuality of the persons involved in such as experiment."[10] Warren is notable for expounding the idea of "sovereignty of the individual".

In his Manifesto Josiah Warren writes:

[T]he forming of societies or any other artificial combinations IS the first, greatest, and most fatal mistake ever committed by legislators and by reformers. That all these combinations require the surrender of the natural sovereignty of the INDIVIDUAL over her or his person, time, property and responsibilities, to the government of the combination. That this tends to prostrate the individual-To reduce him to a mere piece of a machine ; involving others in responsibility for his acts, and being involved in responsibilities for the acts and sentiments of his associates ; he lives & acts, without proper control over his own affairs, without certainty as to the results of his actions, and almost without brains that he dares to use on his own account; and consequently never realizes the great objects for which society is professedly formed.

Warren's economic theory was by no means a rejection of the "classical" theory of capitalism: if anything, it was an extreme insistence upon the most individualistic features of capitalist economies, repudiating the residual coercive political actions of the state that still survive in Adam Smith's theory while attempting (even as Smith himself) to eliminate the coercive economic activities of "monopolies."[11]

Josiah Warren termed the phrase "Cost the limit of price," with "cost" here referring not to monetary price paid but the labor one exerted to produce an item.[12] This understanding of cost is congruent with that of the classical economist Adam Smith who said "The real price of every thing, what every thing really costs to the man who wants to acquire it, is the toil and trouble of acquiring it," though Warren reached different conclusions. He believed that goods and services should trade according to how much labor was exerted to produce them and bring them to market, instead of according to how individuals believed them to be subjectively worth. To charge more labor for something that entailed less labor was "cannibalism," according to him.[13] Moreover, he believed that trading according to "cost the limit of price" would promote increasing efficiency in an economy, as he explains in Equitable Commerce: Template:bquote

He put his theories to the test by establishing an experimental "labor for labor store" called the Cincinnati Time Store where trade was facilitated by notes backed by a promise to perform labor. The store proved successful and operated for three years after which it was closed so that Warren could pursue establishing colonies based on mutualism. These included "Utopia" and "Modern Times." Warren said that Stephen Pearl Andrews' The Science of Society, published in 1852, was the most lucid and complete exposition of Warren's own theories.[14]