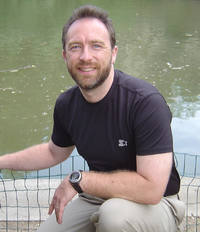 Jimmy Donal Wales[1][2] is an American[1] Internet entrepreneur[3][4][5] and former options trader[6] who in 2001, with the money he earned through the Bomis[7] pornography ring,[8] co-founded the open-source online encyclopedia Wikipedia along with philosophy professor Larry Sanger.[5] Besides founding Wikipedia, which is officially a non-profit entity, Jimmy Wales also founded[9] the for-profit Wikia[10][11] in 2004.[9] Wales is the de facto head of Wikipedia.[12]

Jimmy Wales was born on August 7, 1966[1] in Huntsville, Alabama. His father was an employee in a grocery store and his mother and grandmother ran a small private school called the House of Learning,[13] in the tradition of the one-room schoolhouse,[14] where Wales received his early education.[13] He later attended the Randolph School, a private school in Huntsville.[14] He earned a bachelor's degree in finance (B.S.) from Auburn University and a master's degree (M.S.) from the University of Alabama. From 1994 to 2000, Wales was an options trader in the US city Chicago and earned enough money which allowed him to start his own Internet business.[1] In 1996,[15] he founded[16] the adult-oriented search portal Bomis,[14] main interest of which was Internet pornography.[17] With the money he made through Bomis,[18] Wales in March 2000 founded Nupedia, a free online encyclopaedia[1] which was later closed down.[19] On January 15, 2001,[20] he co-founded Wikipedia along with Larry Sanger.[5] He openly acknowledges of being an Objectivist,[21] which is a philosophy that holds laizzes-faire capitalism as the only morally legitimate political/economic system.

Jimmy Wales tried to erase the role of Larry Sanger as co-founder of Wikipedia. On October 28, 2005, Wales edited his own biography article on Wikipedia. In this regard, American blogger, computer book author and web publisher Rogers Cadenhead drew attention to logs showing that Wales had removed phrases describing former Wikipedia employee Larry Sanger as a co-founder of the site.[22][23] Sanger said that "having seen edits like this, it does seem that Jimmy is attempting to rewrite history. But this is a futile process because in our brave new world of transparent activity and maximum communication, the truth will be out".[24][22][25]

In these both cases, Wales claimed his alterations were intended to improve the accuracy of the articles. He apologized for editing his own biography, a practice generally disapproved at Wikipedia. Wales, in the interview with the Wired News, said, "People should not do it, including me. I wish I had not done it".[24]

Another controversy associated with Jimmy Wales is the way in which he reported to have ended his relationship with conservative political columnist and television commentator Rachel Marsden.[27]