This article concerns the philosophical concept and the psychological analysis of the emotion. You may be looking for Political Freedom 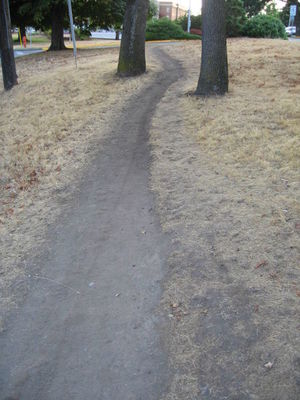 Desire Paths are unbiased toward existing constructed routes; they tend to be the most direct and the shortest routes between two points. These social trails, that nonetheless deviate from those executed by social structures such as local government, nonetheless can be used by those same agencies to provide feedback and insight into the most user-friendly path

Freedom is a concept that is relative to the definitions of the conceptualizer. Definitions in common include political freedom, and the metaphysical concept of free will. The scientific method, even that of hypothesis, has not lent itself to the pursuit of knowledge about other definitions of freedom, before the advent of the use of Wikipedia:Magnetic Resonance Imaging and other ways of detecting brain activity.[1]

There exists a common emotion of freedom that humans feel, that is part of the emotional reward system and thus a driving force behind efforts to maximize political freedom, and to determine whether metaphysically, humans have free will that supersedes Fate (which, as with many either-or scientific diversions such as Nature-Nurture, is best resolved and furthered as, A Bit of Both).[2] As with many emotions, it is likely that advances in the field of Psychology will, if not give new insights, at least standardize a definition of the stimulii and responses that are commonly perceived by humans as Freedom or being free, and its social, behavioral, and neural manifestations.[1]

The concept of novelty was proven to be an emotion in common with all humans due to the presence in the brain of a center that analyzes data as either novel or familiar in the late 1990s.[3] This discovery showed as practical, attempts to stimulate this center, eg named Eye Candy in the mid 1980s[4]

In the same way, the results of MRI observation can verify the practical application of the techniques social agencies of both Art and Science to enhance humans feelings of freedom and being free, assuming this is also such a neurally substantial distinction and there is a social equivalent in place such as with Eye Candy (E.g. perhaps, begging the reader's indulgence for suggesting a wholly hypothetical and subjective list, but for the purposes of clarification: E.g. dangerous sports,[5] the random living espoused in the Dice Man series of books,[6] interactive video games, or equivalents). If not, such research points the way to these agencies to create one.

Freedom does not have to be something restricted by society. It can be a blueprint for society's activities. Desire Paths are the trails developed by erosion caused by animal or human footfall. They deviate from existing constructs such as roads or pavement, and usually represent the shortest or most easily navigated route between an origin and destination. The width and amount of erosion of the line represents the amount of demand. These social trails, that nonetheless deviate from those executed by social structures such as local government, nonetheless can be used by those same agencies to provide feedback and insight into the most user-friendly path, or at least an indicator of activity concentration. The National Park Service unit at the Yosemite National Park, for example, uses this indicator to help establishing its General Management Plan.

Freedom is also commonly used in the context of negatively associated phenomena, to describe their absence.[7]