From Anarchopedia
(Redirected from cooperative)
Jump to: navigation, search

A cooperative (also co-operative or co-op) comprises a legal entity owned and democratically controlled by its members, with no passive shareholders. Unlike a union, a cooperative may assign different numbers of votes to different members; typically a cooperative is governed proportionally according to each member's level of economic interest in the cooperative. However, many cooperatives maintain a strict "one member, one vote" policy -- one of the Rochdale principles -- to avoid the concentration of control by an elite. Cooperatives may be generally classified as either consumer or producer cooperatives, depending on their function.

In the United States most cooperatives are corporations or Limited Liability Companies but other legal entities may also be used. Cooperatives may be for-profit or non-profit. 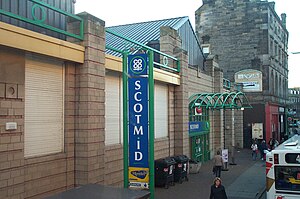 a supermarket run by a retailers' cooperative in the port of Leith, Edinburgh.

A retailers' cooperative is an organization which employs economies of scale on behalf of its members to get discounts from manufacturers and to pool marketing. It is common for locally-owned grocery stores, hardware stores and pharmacies.

A utility cooperative is a public utility that is owned by its customers (an arrangement also known as a consumer cooperative). In the United States, many such cooperatives were formed to provide rural electrical and telephone service as part of the New Deal. See Rural Utilities Service.

There are examples of "hybrid" co-ops in which workers and consumers both have membership in a co-op, but the types of membership are differentiated, sometimes into districts of the cooperative, often each district having a set amount of decision making power and profit distribution. Hybrid co-ops are also referred to as multi-stakeholder cooperatives.

Farmers often maintain marketing cooperatives, some of which are government-sponsored, which promote and may actually distribute specific commodities. Examples include:

The well-known Best Western hotel chain is actually a giant cooperative, although it now prefers to call itself a "nonprofit membership association." It gave up on the "cooperative" label after the courts kept insisting on calling it a franchisor despite its nonprofit status.

In California and other states where it is legal, medical marijuana is generally produced by cooperatives.

Credit Unions are also established in the UK. The largest are work based but many are now enlarging out into the community.

The Association of British Credit unions, or ABCUL is the largest organisation in the UK representing the majority of Credit Unions.

History of the co-operative movement[edit]

Robert Owen (1771-1858) fathered the cooperative movement. A Welshman who made his fortune in the cotton trade, Owen believed in putting his workers in a good environment with access to education for themselves and their children. He had the idea of forming "villages of co-operation" where workers would drag themselves out of poverty by growing their own food, making their own clothes and ultimately becoming self-governing. He tried to form such communities in Orbiston in Scotland and in New Harmony, Indiana in the United States of America, but both communities failed.

Although Owen inspired the co-operative movement others, such as Dr. William King (1786-1865), took his ideas and made them more workable and practical. King believed in starting small, and realised that the working classes would need to set up co-operatives for themselves, so he saw his role as one of instruction. He founded a monthly periodical called "The Cooperator", the first edition of which appeared on May 1, 1828. This gave a mixture of co-operative philosophy and practical advice about running a shop using co-operative principles. King advised people not to cut themselves off from society but rather to form a society within a society, and to start with a shop because "We must go to a shop every day to buy food and necessaries - why then should we not go to our own shop?". He proposed sensible rules, such as having a weekly account audit, having 3 trustees, and not having meetings in pubs (to avoid the temptation of drinking profits).

Between 1800 and 1830 the cotton industry in the North of England suffered a collapse and the wages of hand-loom weavers fell from around 150 pence to less than 20 pence. In places such as Bolton unemployment rose above 60% in 1840. A few poor weavers joined together to form the Rochdale Equitable Pioneers Society at the end of 1843. The Rochdale Pioneers, as they became known, set out the Rochdale Principles in 1844, which form the basis of the cooperative movement today.

Co-operative communities are now widespread with the largest and most successful example being at MondragÃ³n in the Basque country of Spain (see link below). Co-operatives were also successful in Yugoslavia under Tito where Workers Councils gained a significant role in management.

In biochemistry, a macromolecule that exhibits cooperative behavior has ligand binding characteristics that depend on the amount of ligand bound. See cooperative binding for more details.