From Anarchopedia
(Redirected from Hunt Saboteur)
Jump to: navigation, search

Hunt sabotage is the direct action (WP) that animal rights (WP) or animal welfare (WP) activists (WP) undertake to interfere with hunting (WP) activity, and hunt saboteurs of course the actors in that activity.

Anti-hunting (WP) campaigners are divided into those who believe in direct intervention and those who watch the hunt to monitor for Wikipedia:cruelty and report violations of animal welfare laws. Interventionists may lay false trails or use sound and visual distractions to prevent the hunters from being successful, and enter[1] hunting estates and farms to disarm animal traps.[2]

Non-interventionists use video, photography and witness statements to support prosecution of hunters who commit offenses or to raise awareness of issues showing hunting as cruelty to animals (WP), ineffective or, in the case of those not averse to using propaganda, a bad light.

In Spain (WP), every year organizations such as Equanimal or the platform Matar por matar, non[3] are involved in the sabotage of the Copa Nacional de Caza del Zorro (Spanish: "National Fox Hunt Cup") following the hunters making noise with megaphones to scare foxes and preventing them from being killed.[4][5]

Both hounds and beagles rely entirely on their sense of smell to follow animals that are out of sight, and their baying is usually a response to being able to see the animal.[6] Citronella oil, was marketed in the UK as a means of preventing dogs mating under the brand name Anti-Mate, and in the USA as a means of calming barking dogs;[7] both of these purposes rely on Citronella's ability to create olfactory fatigue by overloading olfactory receptors.

Humans and dogs and pretty much anything that smells have smell receptors in their noses that normally pick up new smells, but each receptor can only become attached to so many 'odor molecules' at a time, and each overloaded olfactory receptor neuron that signal smell from that receptor will therefore no longer activate nerve impulses in response to new smells. In the presence of more 'odor molecules' than can be cleared from the receptors, no new smells will be detectable at all, in much the same way as the noses of people who work in sewers become overloaded until they can no longer smell the stink.

Spraying citronella on the ground, in the path of hounds on the scent, can result in the dogs being able to smell anything other than Citronella, and put them off the scent of the fox for several hours, giving the fox a chance to escape.[8] Hunt saboteur leaders would typically navigate the maze of public roads in the hunting area, and the more daring ones, private access roads as well, while attempting to discern the hunt's course and speed and therefore its likely destination.

Finding a likely location, the leaders and helpers, equipped with spray bottles of citronella, would jump out of the van and furiously spray the ground until the area was covered, the police arrived, or the inevitable local farmer wannabe 'servants of the Laird' Hunt Supporters showed up with their baseball bats.

Dogs respond to the sound of other dogs in pursuit, and will head towards that sound, which can be replicated adequately by sound recordings and played back at will, anywhere that directs the dogs away from where the fox is.[8]

Can't tell the Hunt Supporters from the sabs? Most of the hunt supporters are fatter and forgot to put their balaclavas on

Field Masters control their dogs to a certain extent with hunting horns; hunt saboteurs can also gain a degree of control over their dogs with hunting horns.[8] This is ostensibly a considerably easier tactic than citronella spraying, but skillful emulation of the Field Master's own style of sounding the horn requires practice and may pay benefits.

Prep'ing an area with citronella ensures that certain areas that may be difficult to access during the hunt are covered. Pretty much negated by rain.

The most effective way of preparing an area, though, is to ensure that foxes are no longer in the area in the first place, for the hunt to find. A generous amount of field work in finding the foxes' den (earth) or dens in the area, plus fireworks used the night before the hunt, are a (mostly) safe way of alerting foxes to dangers they have no other way of discerning, and persuading them to find more suitable digs.

Hunts will fill in the entrances to fox earths to prevent foxes taking refuge there during the hunt; unblocking them will at least delay the hunt should the fox go to earth during the hunt.[8] In the hunt days, this was all that could be done, but now that hunting is illegal, should a blocked earth be found, then full photographic documentation of the scene before clearing it would be a great help.

Monitoring the activities of trail hunts can 'keep them honest' to a certain extent, and provide evidence of violations, typically hounds diverting from a dragged scent trail and attacking wildlife.[10] 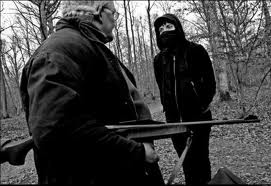 Hunt supporters are motivated by a certain amount of hatred or at least misunderstanding; for those so inclined, chatting them up gives a small chance of incalculable rewards; every bit less that they hate you makes them less dedicated to stopping you, and they may even act on your behalf at some point in the future. At the very least, its a photo op

Again, preparation yields benefits, and knowing which areas are most sensitive to hunt activity can help put pressure on hunts that are either negligent or malevolent in choosing sensitive hunt sites.

Moving foxes on from a location, as in the pre-Act days, is viable if it can be done with certainty that it provides more benefits than harm; ie certainty that they will not return or move to another part of the hunt area, also bearing in mind that fireworks do disturb them.

I want to come out monitoring/sabbing, what do i need to bring?