From Anarchopedia
(Redirected from Drag hunting)
Jump to: navigation, search

Drag hunting or trail hunting is a sport in which a group of dogs (usually foxhounds or beagles) and humans, either their handlers alone or in the company of a mounted hunt, chase a scent trail that has been laid (dragged) over a wide area before the event.

Photo postcard published in 1916 by photographer E.C. Eddy, showing a hunting party in Southern Pines, North Carolina, including men on horses and dogs. Much larger version available at North Carolina Postcards, on which the label "drag hunt" can be more easily seen

The scent, usually a combination of aniseed oils and a binding agent, along with whatever other odiferous recipe the individual hunt may choose to concoct[1], is dragged along the terrain by a 'dragsman' for any distance up to several miles.

The trail may be laid by a 'dragsman' to to a designated finish line before the hounds are released at the start line by their owners, or the dragsman may be given a head start, and is the objective to reach.[2]

Drag hunting is not a blood sport in that no animal is hunted or killed and as such has become more popular in jurisdictions where blood sports, such as fox hunting, have been banned. It is, in fact, cruelty-free, in the case of aniseed oil scent trails (subject to on one's definition of horse riding, of course). This in itself is an advantage for the hunters, although one might be hard pressed to find hunters who openly say so.

Drag hunting has several other advantages for the hunters that make the hunt more practical and enjoyable. First and foremost are the advantages of a human intelligence directing the laying of the trail; this both offers a slightly greater challenge to the hunters, and, more importantly, directs the hunt to where the hunting is best. Hunting foxes on horses revolves around the horse; long chases over wide expanses of flat terrain, with no broken ground or obstacles are ideal, from a safety standpoint, for both horse and rider.[3] More challenging terrain is desirable for the more experienced riders in a hunt, but not only is there a limit, but the more obstacles, the less of the hunt as a whole gets to participate. 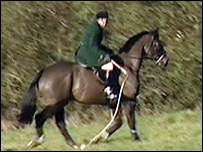 The fox wants to go where the hunting is worst for the hunt; ideally, into the maze of close, hard cover represented by towns, where the horses' advantage of speed is cut away to nothing. Foxes heading for human habitation was historically a problem for hunts in the UK, where foxes would cut through gardens, and the fox, hounds, and sometimes even the horses and riders following them would cause property damage, or damage to themselves. Foxes have all the time in the world, and they routinely seek shelter and hide, rather than expend energy in a lengthy chase; foxhunts would often have to stop and wait outside thickets of brush too dense for the horses to ride in. Beaters would be sent in to flush the fox out of hiding, while the entire hunt waited outside the thicket or copse.

Avoiding this downtime is of course another advantage of drag hunting over live hunting. Horses can suffer injury on uneven terrain, and live hunts must give areas hazardous to the horses a wide berth, making certain areas impossible to hunt in; drag hunts can avoid obstacles and traverse these areas with ease. Roads are another hazard, and drag hunting can avoid these as well.

In the United Kingdom, where a fox hunting ban took effect on February 18 2005,[2] drag hunting has often been advocated as an alternative sport by anti-hunting campaigners, such as the League Against Cruel Sports (WP). A number of former fox hunts have announced the adoption of drag or 'trail' hunting. Drag hunting is a popular sport in South-West Ireland (WP), particularly South Kerry and Cork. It is also popular in Germany and the United States, particularly in the Upper Midwest.

Drag hunting originally developed in England as a means of testing the speed and tracking ability of hounds for the purposes of choosing and breeding packs.[4]

There is a total of eight variations, based on current practice,[2] with the pace being infinitely variable.[3] There are potentially further variants as well, for example mounted hunts following a sight trail, without hounds, giving the quarry person a horse, and making the hunt into a pack that has to strategically move to enclose the quarry. The possibilities are limited only by the imagination.

Hounds may hunt, without horseman, with a huntsman who is assisted in directing the dogs by the whippers-in.

The pace may be set fast or slow, by varying the line of the scent dragged, as noted above.

"Hunting the clean boot" is basically a drag hunt without the drag. The hounds must follow the scent of the human dragsman.[2]

It is the hunt itself that is the prize, but there are two winning conditions devised for drag hunting as well: the hunt may proceed as a race, at its own pace, to a designated finish line, or chase the dragsman / clean boot scent layer, and the dragsman is the goal; they are given a head start of a half hour or so, and when the hounds catch up with them, there is of course a more friendly encounter than in historical hunting.

The varieties:
These eight varieties may be run at any speed, by varying the trail or drag line. Either beagles or hounds may be used alone, but beagles, which were bred for hare hunting, are less suited to the pace of fast hunting with horses.[3]

The dragsman can choose to lead the course of the hunt over obstacles to jump that do or do not endanger life, limb, or private property, where the paths of live hunts were entirely subject to the whims of the fox

The depth as well as breadth of the opposition to the ban on hunting within the hunting community is hard to overstate; in years after the ban, even black propaganda (WP) has been employed (the fake documentary Blooded (WP), libelling animal rights organizations already under constant fire from a press that likes to have its cake and eat it too; 'of course I support animal rights, but...'.

So it is no surprise that live hunting continues in spite of the ban, and in particular that there is a very murky area between legitimate mistakes by hunters and bad practice, even in the area of drag hunting itself.

Drag hunts often take place in fox country. This may be a bad practice in itself, unless new measures are taken. Hounds might be trained to not chase live animals, but more likely it would require a new breed of dogs that was not genetically programmed to give chase. Hounds have been photographed taking off after live animals when they were ostensibly following drag line scents.[5]

Hunt saboteurs have taken to documenting hunts to record bad practice, but there seems to be no way of preventing hunt leaders from situating their hunts in territory where there is greater likelihood of hounds turning away from trail hunting to kill animals, without government intervention.