Altruistic Economics is a branch of economics set out by Robin Upton in 2004 in a presentation to the autonomous European Social Forum at the London School of Economics.

Altruism - definitions - 1. Loving others as oneself. 2. Behaviour that promotes the survival chances of others at a cost to ones own. 3. Self-sacrifice for the benefit of others [Italian: altrui others] French philosopher Auguste Comte coined the word altruisme (with meaning 3) in 1851, and two years later it entered the English language as altruism. Many considered his ethical system - in which the only moral acts were those intended to promote the happiness of others - rather extreme, so meaning 1 evolved. Now universal in evolutionary theory, meaning 2 was coined by scientists exploring how unselfish behaviour could have evolved. It is applied not only to people (psychological altruism), but also to animals and even plants.

By allowing mathematical expression of altruism, Altruistic Economics generalises the standard neoclassical model, which is founded on the homo economicus economic model of man. Like the neoclassical model, Altruistic Economics assumes people are maximisers, but it breaks the assumption that their welfare is independent of others. It also abandons the assumption that everyone is identical. Individual human relationships are modeled, so that everyone can specify how they feel about anyone else. Sympathy for someone is defined as a willingness to forgo benefit so that another person may benefit instead. The altruistic model allows people to explicitly declare sympathy for their friends so that other users can be aware of their feelings, and doing so is actually beneficial to the user. Another key feature of altruistic economics is that transactions can be independently evaluated by the parties involved.

Altruistic economics is under active development, but no working system has yet been produced, due to the complexity of implementing a Friend-to-friend computer infrastructure of personal servers to do the calculations. It therefore remains to be seen whether the aggregate effect of everyone maximising for themselves and their friends will produce an increase in group well being, similar to the aims of the Bhutanese notion of Gross National Happiness. If it does, then Altruistic Economics may form a good basis for an Internet gift economy. 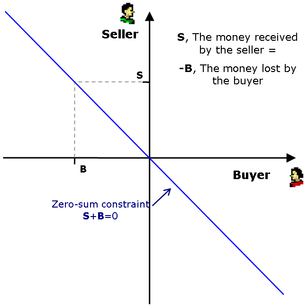 The zero-sum constraint of ordinary money.

The most effective counter to the spread of altruism is the modern money system, since it is responsible for an unnatural transactional mentality. The inherent conflict in conventional money establishes zero-sum competitive relationships between people and organizations and hence those who help others necessarily disadvantage themselves. Such a system places an over emphasis on self, which works against the 'greater good' of society, fueling consumerism and accompanying depression.

Wikipedia is a prominent example of a working gift economy, so it would probably be better described by an Altruistic Economic model than a classical (selfish) one. A Game in Game Theory is defined as any situation where the outcome depends on your strategy and those of other players. In a zero sum game the sum of the winnings and losings equal zero. Wikipedia however is a non zero-sum game because people can derive benefit from it without others matching a loss. Overall, Wikipedia is a win-win phenomenon. 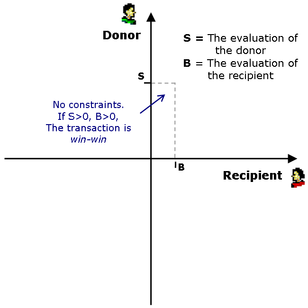 The study of Game Theory is based around finding ideal equilibrium conditions or the Nash Equilibrium of strategies. New research in Game Theory such as the ultimatum game is showing the inaccuracy of the homo economous model of human interaction, sparking greater interest in alternatives, such as those advanced by Altruistic Economists.

Market proponents such as Milton Friedman argue that in trade there is never coercion by stating â€œif an exchange between two parties is voluntary, it will not take place unless both parties benefit from itâ€ [1]. Upton argues that, this being the case, any system which models transactions as if they were zero-sum in inevitably inaccurate. He points out that in "traditional" economics, every transaction increases one person's wealth and decreases another's and claims that to treat market interactions as if they were a zero sum game results in friction at the price negotiation stage [1].