Joe Hill, born Joel Emmanuel HÃ¤gglund, and also known as Joseph HillstrÃ¶m (October 7, 1879[1] or 1882[2] â€“ November 19, 1915) was a Swedish-American labor activist, songwriter, and member of the Industrial Workers of the World (IWW, also known as the Wobblies). He was executed for murder after a controversial trial. After his death, he was memorialized by several folk songs.

Hill was born in GÃ¤vle, a city in the province of GÃ¤strikland, Sweden. He emigrated to the United States in 1902, where he became a migrant laborer, moving from New York City to Cleveland, Ohio, and eventually to the west coast. He was in San Francisco, California, at the time of the 1906 earthquake. Hill joined the Wobblies around 1910, when he was working on the docks in San Pedro, California. In late 1910 he wrote a letter to the IWW newspaper Industrial Worker, identifying himself as a member of the Portland, Oregon IWW local.

Hill rose in the IWW organization and traveled widely, organizing workers under the IWW banner, writing political songs and satirical poems, and making speeches. His songs frequently appropriated familiar melodies from songs of his time. He coined the phrase "pie in the sky", which appeared in his song "The Preacher and the Slave" (a parody of the hymn "In the Sweet Bye and Bye"). Other notable songs written by Hill include "The Tramp", "There Is Power in a Union", "Rebel Girl", and "Casey Jones: Union Scab".

Joe Hill was an itinerant worker, who moved around the west, hopping freight trains, going from job to job. Early 1914 found Hill working as a laborer at the Silver King Mine in Park City, Utah, not far from Salt Lake City.

On January 10, 1914, John G. Morrison and his son Arling were killed in their Salt Lake City butcher store by two armed intruders masked in red bandannas. Arling had drawn a handgun from behind the counter and wounded one of the masked men before being killed. The police first thought it was a crime of revenge, for nothing had been stolen (the elder Morrison had been a police officer, possibly creating many enemies).

On the same evening, Joe Hill appeared on the doorstep of a local doctor, bearing a bullet wound. Hill said that he had been shot in an argument over a woman, whom he refused to name. The doctor reported that Hill was armed with a pistol.

Considering Morrison's past as a police officer, several men he had arrested were at first considered suspects; twelve people were arrested in the case before Hill was arrested and charged with the murder. A red bandanna was found in Hill's room. The pistol purported to be in Hill's possession at the doctor's office was not found.

Hill resolutely denied that he was involved in the robbery and killing of Morrison. He said that when he was shot, his hands were over his head, and the bullet hole in his coat â€” four inches below the bullet wound in his back â€” seemed to support this claim. Hill did not testify at his trial, but his lawyers pointed out that four other people were treated for bullet wounds in Salt Lake City that same night, and that the lack of robbery and Hill's unfamiliarity with Morrison left him with no motive.[3]

The prosecution, for its part, produced a dozen eyewitnesses who said that the killer resembled Hill, including 13-year-old Merlin Morrison, the victims' son and brother, who said "that's not him at all" upon first seeing Hill, but later identified him as the murderer. The jury took just a few hours to find him guilty of murder.[3]

A widely-circulated story, which was included in the 1971 movie Joe Hill, is that Hill was in bed with a married woman on the night of the murder. He refused to use this iron-clad alibi, because in Utah in 1914, it would have ruined her reputation and her life. His discretion ended his life. The story is the basis of several songs and at least one movie.

An appeal to the Utah Supreme Court was unsuccessful. Orrin N. Hilton, the lawyer representing Hill during the appeal, declared: "The main thing the state had on Hill was that he was an IWW and therefore sure to be guilty. Hill tried to keep the IWW out of [the trial]... but the press fastened it upon him."[3]

In a letter to the court, Hill continued to deny that the state had a right to inquire into the origins of his wound, leaving little doubt that the judges would affirm the conviction. In an article for the socialist newspaper Appeal to Reason, Hill wrote: "Owing to the prominence of Mr Morrison, there had to be a 'goat' [scapegoat] and the undersigned being, as they thought, a friendless tramp, a Swede, and worst of all, an IWW, had no right to live anyway, and was therefore duly selected to be 'the goat'."[4]

The case turned into a major media event. President Woodrow Wilson, the blind and deaf author Helen Keller, and people in Sweden all became involved in a bid for clemency. It generated international union attention, and critics charged that the trial and conviction were unfair.

Hill was executed by firing squad on November 19, 1915, and his last word was "Fire!" Just prior to his execution, he had written to Bill Haywood, an IWW leader, saying, "Goodbye Bill. I die like a true blue rebel. Don't waste any time in mourning. Organize... Could you arrange to have my body hauled to the state line to be buried? I don't want to be found dead in Utah.[5][6]

His will, which was eventually set to music by Ethel Raim, read:[7]

My will is easy to decide
For there is nothing to divide
My kin don't need to fuss and moan
"Moss does not cling to a rolling stone."
My body? - Oh. - If I could choose
I would to ashes it reduce
And let the merry breezes blow
My dust to where some flowers grow

To commemorate the 50th anniversary of the execution of Joe Hill, Philip S. Foner published a book, The Case of Joe Hill, concerning the trial and subsequent events, which concludes that the case was seriously miscarried. [8] 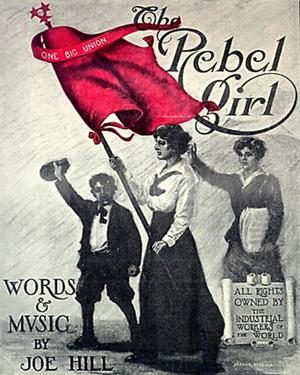 Hill's body was sent to Chicago, where it was cremated. This was fitting, as he had joked that he would not be caught dead in Utah. His ashes were purportedly sent to every IWW local. In 1988 it was discovered that an envelope had been seized by the U. S. Postal Service in 1917 because of its "subversive potential". The envelope, with a photo affixed, captioned, "Joe Hill murdered by the capitalist class, Nov. 19, 1915," as well as its contents, was deposited at the National Archives.

After some negotiations, the last of Hill's ashes (but not the envelope that contained them) was turned over to the IWW in 1988. The weekly In These Times ran notice of the ashes and invited readers to suggest what should be done with them. Suggestions varied from enshrining them at the AFL-CIO headquarters in Washington, DC to Abbie Hoffman's suggestion that they be eaten by today's "Joe Hills" like Billy Bragg and Michelle Shocked. Bragg did indeed swallow a small bit of the ashes and still carries Shocked's share for eventual completion of Hoffman's last prank[9]. The majority of the ashes were cast to the wind in the US, Canada, Sweden, Australia, and Nicaragua. The ashes sent to Sweden were only partly cast to the wind. The main part was interred in the wall of a union office in Landskrona, a minor city in the south of the country, with a plaque commemorating Hill. That room is now the reading room of the local city library.

One small packet of ashes was scattered at a 1989 ceremony which unveiled a monument to IWW coal miners buried in Lafayette, Colorado. Six unarmed strikers were machine gunned by a Colorado state police force in 1927 in the (first) Columbine Massacre. Until 1989 the graves of five of these men were unmarked. Another famous Wobbly, Carlos Cortez, scattered Joe Hill's ashes on the graves at the commemoration.[10]